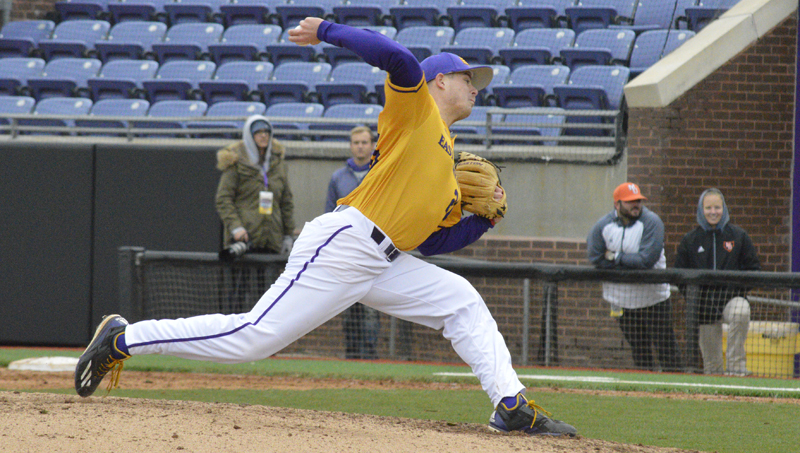 Tyler Smith throws during a game earlier in the season. The freshman has made 13 appearances this season, mostly out of a struggling bullpen that has hurt ECU in close games.

HOUSTON — Losers of its last four games, East Carolina (18-12, 0-3 American Athletic Conference) faces a tough task as it attempts to recover from being swept by Connecticut at home in its league-opening series. The Pirates will travel down to Houston (20-8, 1-2 AAC), which also seeks to get back on track after dropping its first series at Central Florida last weekend.

Three of ECU’s losses in the four-game skid have been one-run games. The most recent was a 3-2, 11-inning loss at North Carolina. It was the second time in as many appearances for Joe Ingle that the junior closer picked up a loss after coming on in a crucial point in the game. He gave up a hit and two walks as the Tar Heels walked off for the win.

In 1 2/3 innings in the second game of the UConn series, Ingle conceded an unearned run after conceding a hit and walking two. With that, Ingle’s earned-run average has inflated to 5.00. Jacob Wolfe has struggled, too. The senior southpaw owns a 4.73 ERA and 3-2 record in nine appearances.

Wolfe’s struggles and the injury of ace Evan Kruczynski have put pressure on the younger arms. Freshmen Jake Agnos (2.35) and Trey Benton (2.09), and sophomore Chris Holba (1.95) own the best ERAs among the Pirate staff. While they’ve combined for a 7-2 record, needing them as weekend starters has depleted the bullpen’s depth.

The staff will have its work cut out against the Cougars. Four are batting above .300. Jake Scheiner leads Houston by hitting at a .400 clip through 28 games. He’s the team’s power source, too. He’s accounted for 10 of its 18 home runs and is slugging at a .791 rate.

On the mound, Houston is set to send out American Pitcher-of-the-Week Trey Cumbie. He leads the Cougars, which collectively own a 2.40 ERA, and the conference with a 0.74 ERA. He has thrown nearly 20 scoreless innings in a row heading into Friday’s opener.

Mitch Ullom is set to take the ball on Saturday. He started the Sunday finale in last year’s series. He gave up an earned run on seven hits and fanned four over 7 1/3 innings of work. This season, Ullom is 4-2 with a 2.66 ERA.

The Cougars will lean on John King on Sunday. The senior lefty, who has also garnered conference honors this season, has a 2.22 ERA and has pitched three complete games.

Dwanya Williams-Sutton, who was ECU’s leadoff batter and last year’s No. 1 rookie in the conference, has played sparingly due to injury. After returning on March 24 against Towson, the sophomore phenom hasn’t taken the field since leaving last Saturday’s game against the Huskies early.

The Pirates have the firepower. Eric Tyler leads the regulars by batting at a .352 clip, and Dusty Baker has a .375 average in a smaller sample size. In addition to those two, four others are hitting above the .300 mark, but Houston’s pitching staff will be among the stingiest they see all season.

Friday and Saturday’s games are both scheduled to begin at 7:30 p.m. Sunday’s series finale will have a 2 p.m. first pitch.