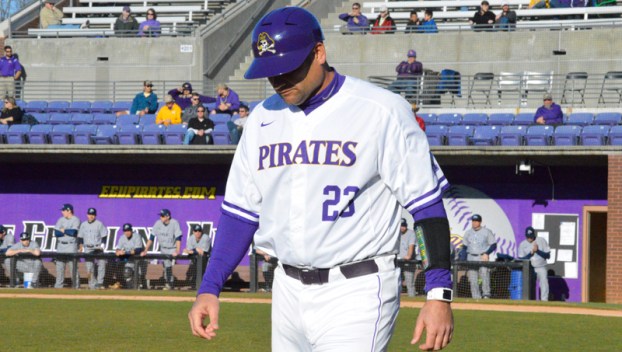 ECU coach Cliff Godwin paces the third-base line during a game. Godwin and ace pitcher Evan Kruczynski were emotional with the media after last weekend’s sweep that saw the Pirates drop to 0-9 in the American Athletic Conference.

Stepping Up: Pirates search for answers as season falls apart

It was an emotional weekend for an East Carolina baseball team that started to see the wheels fall off of its 2017 season that started with only visions of a trip to Omaha for the College World Series come June.

The series loss against Central Florida cut deepest. ECU was coming off of a midweek win against UNC-Wilmington and was ready to get back on track. The offense and bullpen had been struggling the most headed into the weekend.

The offense seemed to figure itself out early in the first game. The Pirates jumped out to a 7-1 lead before they went ice cold from the fifth inning on. During that time, the bullpen started to fall apart. Jacob Wolfe allowed three runs, Sam Lanier surrendered one, Tyler Smith a pair, and in extra innings, Matt Bridges was charged with the game-losing run that was allowed by Ryan Ross.

A nine-run eighth inning by UCF evaporated a 2-0 ECU lead late one day later. Despite Evan Kruczynski’s strong return to the mound Saturday, ECU’s offense disappeared in a 7-0 loss.

The emotions were clear as players walked from the post-game team meeting in left field. It became even clearer as Kruczynski seemed to almost not hear questions during his postgame availability. His answers circled back around to the team trying to understand where things went wrong.

“We’re searching right now. It’s a tough time for us,” he said while the typically engaging senior avoided making eye contact with the media. “We’ve just got to keep going at it everyday. There’s nothing we’re doing wrong with our effort or preparation or any of that. Truly I love these guys and we’re fighting.”

It became even clearer as head coach Cliff Godwin stepped up to meet the media. He wore his heart on his sleeve and even had to take a moment to compose himself while responding to questions. ECU wasn’t catching any breaks over the weekend, as it hasn’t all season long. The Pirates were 0-for-11 with runners on base in the series-finale loss and only had three strikeouts with runners on.

Balls were simply not catching enough wind when hit in the air and hard-hit balls to the infield were bouncing into perfect position for the Knights to turn double plays and kill rallies. It was tough, and Godwin showed that.

That was preceded early in the season with the loss of Dwanya Williams-Sutton to a thumb injury, which was still bothering him at the plate. Evan Kruczynski pitched in just three games before missing nearly a month and a half after catching a line drive off the ankle against Western Carolina. Junior closer Joe Ingle had an ERA over six before being dismissed from the program Tuesday. On top of all that, former freshmen stand out relievers Lanier and Bridges have failed to replicate performances in their sophomore seasons. Above all else, Godwin is concerned for his seniors, who have spent four years building a legacy that started with a failed attempt to win a Conference USA tournament and most recently was just 90 feet from Omaha against Texas Tech.

“It’s nice (that the seniors have relationships to fall back on),” Godwin said. “But when you’re seniors, they’re upset. They don’t understand why (the team is struggling). We do things the right way, like I said. I know there’s a lot of people out there in the public that don’t know what we do. We always talk about leaving a legacy and they’re worried about, ‘Well is our legacy going to be tarnished and how so.’ It’s tough.”

Godwin walked off after delivering his message. And it is tough. It’s been one pitch away. One failed attempt to drop in a hit with a man in scoring position away. And more than one injury away.

Ultimately, this team will be remembered regardless of what happens between now and mid-June when the College World Series starts. This team carried ECU to its best chance at Omaha in decades. It pushed the university to the national stage and all the while, the team maintained one of the highest GPAs on campus.

But if you’re looking for some hope, look no further than the 2008 Fresno State baseball team that finished the regular season 33-27 and made a run all the way to a College World Series championship after starting the season ranked No. 21 in the country.

It’s not the most likely scenario but with a senior cast of leaders and still high-powered offense, anything is possible.