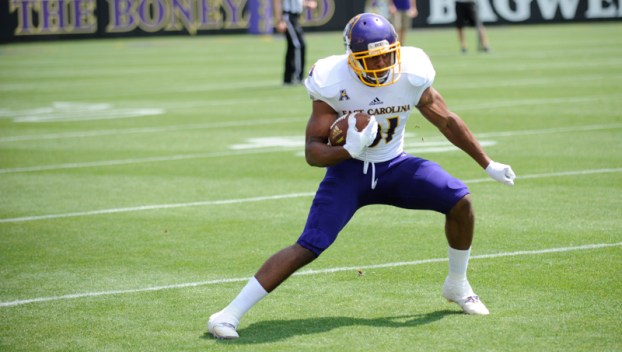 Former Washington quarterback and senior wide receiver Jimmy Williams makes a catch. He goes to make a cut to evade defensive back Corey Seargent, who is closing in. Williams had a touchdown grab in the scrimmage to wrap up what has been a strong spring.

GREENVILLE — East Carolina’s spring football regimen came to a conclusion Saturday afternoon in Dowdy-Ficklen Stadium. Pirate fans came out to get their first glimpse of newcomers like quarterback Kingsley Ifedi, and how the new 4-2-5 defensive scheme would stymie the offensive weaponry.

When all was said and done, the purple and gold squads finished in a 17-17 draw. The coaching staff appreciated the way the defense came together after getting torched time and again weeks ago in the first scrimmage.

“I thought, defensively, up front, for the first time since I’ve been here, I saw true pressure applied to the quarterback,” second-year head coach Scottie Montgomery said. “We’ve got some things to clean up in the passing game. I thought we missed a few down the field shots that we could have had there. Then again, I thought some of our (defensive backs) were closer than they had been even throughout spring. I thought people did some good jobs.”

Offensively, the Pirates showed their depth at running back and wide receiver. Hussein Howe was the afternoon’s leading rusher with 10 carries for 92 yards. Havelock native and Tennessee transfer Derrell Scott, who was used minimally last season, ran five times for 51 yards and a touchdown. Devin Anderson had eight carries for 40 yards.

“I really liked the way (Scott) ran the football. That jump cut was impressive,” Montgomery said. He had a 27-yard touchdown that marked the second-team offense’s second unanswered strike to start the game.

Offensive coordinator Tony Petersen added, “Right now, we’ve got three running backs that we think are pretty equal that we can play with. I wouldn’t say there’s a dominant one over any of them.”

Scott’s touchdown run followed up Reid Herring’s scoring connection with Malik Gray. It built a 14-0 lead for the second team. The second-team defense set the tone early. Anthony Scott scampered along the right sideline for a touchdown, but it ended up being called back due to a penalty.

Corey Seargent picked off Gardner Minshew on the next play.

“We’re just trying to listen to our coaches and make plays,” Seargent said. “If we come out and stay focused, we can be the best in the country if we put our minds to it. The first scrimmage, we had a lot of mistakes, but we’ve definitely improved.”

After a pair of turnovers and two punts of its first four drives, the first-team offense broke through when Minshew hit former Washington quarterback Jimmy Williams for a 36-yard touchdown. Minshew drew even with a pinpoint pass to Quay Johnson for an 18-yard score.

“I just had to settle in and start hitting my throws,” Minshew said of the way he recovered from the sluggish start. “I just give a chance to these great receivers I have, put the ball in their hands and good things happen.”

It seemed that both defenses settled in after the first half, too. The second half came and went quietly. The only score was Jake Verity’s second field goal of the contest, which knotted the game at 17 apiece. Colby Gore made a game-high eight tackles. Redshirt freshman defensive back Keyshawn Canady and junior-college transfer linebacker Cannon Gibbs each had seven tackles.

GREENVILLE — Former East Carolina wide receiver and soon-to-be professional Zay Jones has always been overlooked. So much so that,... read more