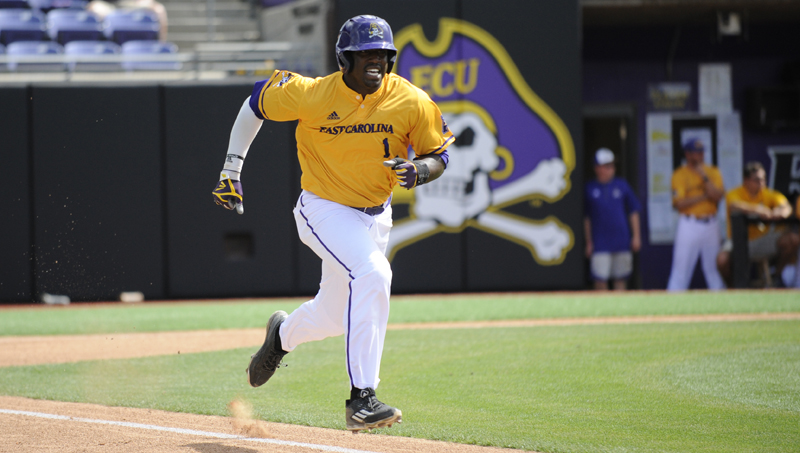 Dwanya Williams-Sutton runs to first during a game against Tulane this season. Williams-Sutton had an early two-run home run in Sunday’s game, but pitching issues led to another sweep for the Pirates.

Kevin Merrell and Tyler Dietrich were hot all weekend for the Bulls. The duo went 13-for-22 over the three-game set. Merrell started the weekend series slowly as he went 0-for-5 with an RBI against Evan Kruczynski. The Pirate ace came out cold, as well. He was hit eight times for five runs (all earned) over six innings.

Even with a rough outing for the typically reliable senior southpaw, ECU’s bats kept them in the game. The Pirates drew first blood with a run in the second and, after squandering a 3-0 lead, were able to tie the game at five apiece. West Covington ended up taking the loss as he let two score in just one out’s worth of work.

Bullpen struggles were the motif in Saturday’s outing, too. Starter Trey Benton gave up four runs (all earned) on eight hits in 4 2/3 innings. It put the Pirates in a 4-0 hole after five innings, but they used the long ball to mount a comeback. Eric Tyler belted a two-run shot to left field to cut the deficit in half. Eric Tyler and Travis Watkins followed him with solo home runs. Watkins’ homer tied the game at 4-4 in the ninth and forced extra innings, but Merrell scored on David Villar’s base-hit RBI to win, 5-4, in the 10th.

The Pirates cycled through four bullpen arms after Benton came out. Jacob Wolfe, Matt Bridges and Ross Ryan all failed to put in an inning of work. Sam Lanier put together one of his best outings of the season as he threw 3 2/3 innings of no-hit baseball.

The Bulls, after locking up the series on Saturday, jumped on the Pirates quickly in Sunday’s finale. Joe Genord doubled to score Merrell. Dietrich and Coco Montes followed him with a pair of two-RBI singles to give USF a lopsided 5-0 lead after one inning.

Sunday starter Jake Agnos had been coming off arguably his best showing on the mound a week prior, but he was torched for six runs (all earned) on nine hits and two walks. He only lasted 3 2/3 innings before head coach Cliff Godwin turned to the bullpen. The combination of Tyler Smith, Covington and Davis Kirkpatrick shut out the Bulls for the remainder of the game.

The Pirates couldn’t get the offensive output to erase the early deficit. Dwanya Williams-Sutton put them on the board with a two-run bomb to centerfield in the second stanza. Watkins batted in Eric Tyler, who led ECU by going 2-for-4 at the dish on Sunday, but that was all they’d muster. USF starter Peter Strzelecki threw over eight innings to get the win.