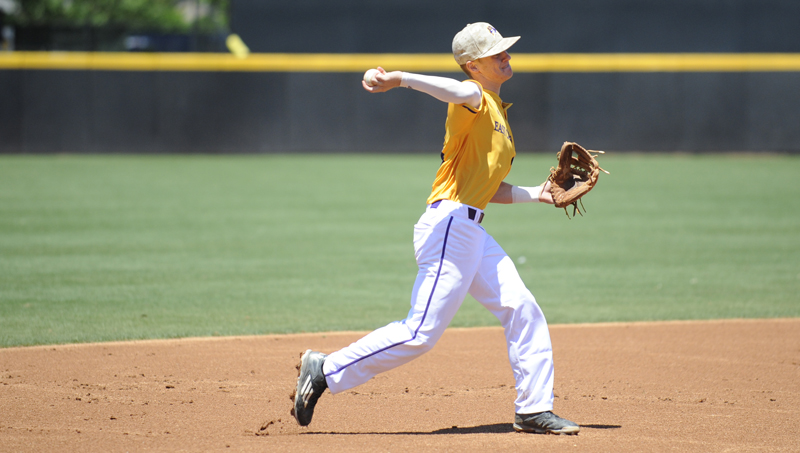 Turner Brown fields a ball against Memphis in a recent game. Brown made key plays at the plate and in the field in a landslide win over Central Florida.

CLEARWATER, Fla. — Trailing 2-0 in the third inning, Charlie Yorgen took a full-count, two-out pitch and crushed it to right field for a three-run home run. It gave the eighth-seeded Pirates the lead, and they never looked back in a 14-3 shellacking of No. 1 seed Central Florida in their American Athletic Conference opener.

ECU scored multiple times in the third, fifth, sixth and ninth innings en route to the landslide win. Contributions throughout the lineup fuelled the first-round win in the double-elimination tournament that is ECU’s last path to an NCAA regional. The game marked just the second time all season that all nine starters had a hit, and the first time in this campaign that all scored a run.

Evan Kruczynski, who wasn’t used over the weekend at Connecticut, threw 102 pitches over six innings in his start on Tuesday. The Knights scored two runs (one earned) on eight hits. Tyler Smith took the ball in the seventh inning. He enjoyed a 9-2 lead when he entered the game, and allowed an earned run on two hits. Davis Kirkpatrick struck out two in the final inning.

The Pirates had a field day on the patchwork pitching staff UCF rolled out. Trent Thompson lasted less than three innings in his fourth start of the season. The Knights sent out four others to the mound. None lasted more than two stanzas.

Shortstop Turner Brown, who had a highlight-reel diving snag in the game, belted a two-RBI double in a three-run fifth inning that extended ECU’s lead to 7-2.

Kruczynski retired the Knights in order in the bottom of the fifth to set up another offensive burst. Leadoff batter Dusty Baker was hit by a pitch, then moved to second on Brady Lloyd’s sacrifice bunt. Yorgen’s single put runners on the corners, allowing Travis Watkins to clear the bases with a double to right-center.

UCF scored a run in each of the first two frames. After being held scoreless for five innings, the Knights got back on the board with a run in the bottom of the eighth.

Despite the rally, ECU still enjoyed a 10-3 lead entering the ninth. The Pirates added onto it when Eric Tyler and Brown each scored before the Knights even picked up an out. They peppered on two more runs to take a commanding 11-run lead.

The win had to have been a confidence booster for the Pirates. They first faced UCF in Greenville on April 13. They built a 7-1 lead in four innings before ultimately losing 8-7 in 11 frames. They not only continued to stave off top-seeded UCF this time around, but continued to add on to their advantage.

ECU will get a day off before meeting No. 4 South Florida Thursday. First pitch is scheduled for 7 p.m. ECU was swept by the Bulls earlier this month.