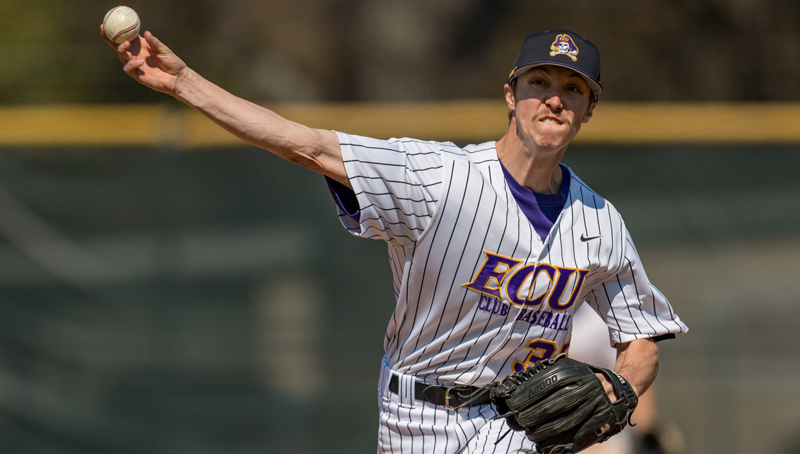 ECU ace Hatteras Brooks throws a pitch during a game against Penn State earlier in the season. Brooks and head coach Ben Fox, both Washington natives, are leading the charge as ECU’s club baseball team enters the NCBA World Series as the No. 1 seed. (Richard L. Miller Photography)

GREENVILLE — This weekend, East Carolina’s club baseball team will be headed to the National Club Baseball Association World Series for the fourth time in a row. The Pirates ended the regular season with a 26-2 win over North Carolina. They kept the momentum rolling as they marched through the Mid Atlantic Regional in Martinsville, Virginia.

ECU won its first game in shutout fashion, 11-0, over Ohio. The Pirates then erased a three-run deficit in the ninth inning against Ohio State to walk off and into the regional-championship game. They again beat Ohio, 14-7, to punch their tickets to the championship game.

Washington’s baseball products have helped ECU get this far. Ben Fox, a 2006 Washington graduate, is the team’s head coach. Hatteras Brooks, a class of 2011 Pam Pack alumnus, is the team’s ace pitcher.

Fox, Brooks and the rest of the Pirates’ club are no strangers to the NCBA World Series. This year is different, though. ECU will enjoy a home atmosphere in Holly Springs.

“We’re very excited. This is our fourth year in a row going, but it’s the first year it’s ever been in Holly Springs,” Fox said. ECU players and fans alike appreciate the close proximity compared to past years. “Being in North Carolina, we’re hoping to have a big group of fans.”

ECU has been a sort of juggernaut in years past. Brooks knows that he’s going to get an opponent’s best shot when he takes the mound this late in the season. Being about two hours from home gives this foray into the World Series a differnet feeling.

“In past years, it’s been like all the other teams are against us,” Brooks said. The Pam Pack-turned-Pirate is the reigning NCBA pitcher of the year. “We go in as the No. 1 seed or have this reputation of having a target on our back. I think, for once, we’re going to be at home and have more fans. I definitely think that we’ll have a home-field advantage.”

Top-seeded ECU has experience throughout its lineup. Fox said that only one player in the starting nine will be playing in the World Series for the first time.

Coming up through the Washington baseball ranks has taught Fox and Brooks lessons that they still carry with them.

“Playing all-star baseball was always fun. I would say high school, probably my sophomore year, we went to the second round of the playoffs,” Brooks said. “I know they just won their first playoff game since then. That was pretty cool.”

Fox fondly remembers his all-star team winning the district when he was 11 years old. For him, though, he learned a lot by returning to the recreation level as a coach.

“That was probably my best memory from baseball because we got to give back,” Fox said. He leans on some knowledge he learned from his father, who coached him when he was young. “I talk to him still. He reinforces to me that nothing I’m going to do as the head coach is going to (matter much). I make some big decisions, but you only go as far as your players take you is what he says.

“I’m really blessed to have some really good players.”

No. 1 ECU opens World Series play against No. 8 Michigan State on Friday at 7 p.m. Fox and Brooks both hope to see some hometown faces in the stands in Holly Springs.

Fox added, “My family still lives in Washington. I have a lot of friends I grew up. Any kind of support. We still (represent) Washington. It’s where we’re from and we definitely would love those people to come out and support us, see some faces we haven’t seen in a while.”