Stepping Up: How ECU AD Compher earned his extension 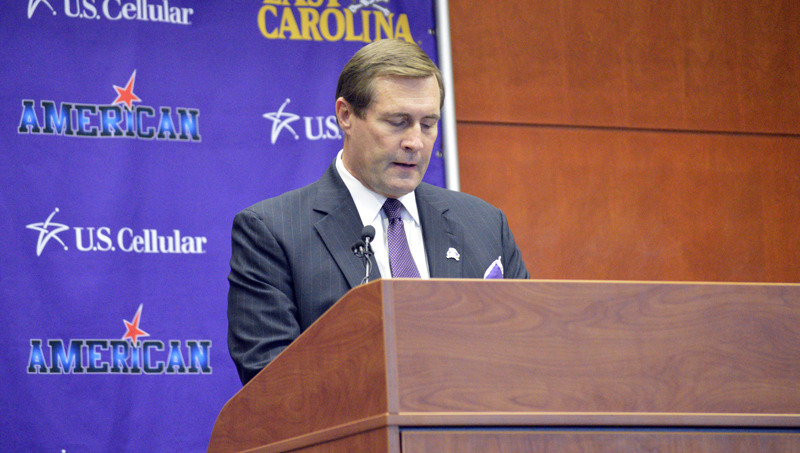 Jeff Compher takes the podium to announce the hiring of Scottie Montgomery as head football coach. Compher, whose deal was set to expire in 2018, has been given a five-year extension.

East Carolina hired Jeff Compher as its new athletic director, replacing Terry Holland, back in 2013. The new man in charge of Pirate athletics came from a five-year stint at Northern Illinois.

Fans were understandably skittish about the hiring. Holland, who spent nearly a decade in Greenville, made a splash quickly when he hired Skip Holtz in 2004. Holland helped forward ECU’s gripes with the Atlantic Coast Conference when he downed Duke, North Carolina State and Virginia in his first two seasons. He also chalked up a win against Conference USA rival Southern Miss.

Holtz also helped the Pirates to consecutive Conference USA championships before leaving to become the head coach at South Florida. Holland hired beloved football coach Ruffin McNeill, who also enjoyed plenty of success in his six years at the helm. Among the numerous other fond memories of Holland’s tenure was a CIT Championship for the basketball team.

Compher came in with big shoes to fill. One of his first big moves as athletic director was to dismiss baseball coach Billy Godwin. Compher hired an eastern North Carolina product in Cliff Godwin. Before coming to Greenville to play for legendary coach Keith LeClair, Godwin had grown up in Snow Hill and played for the Greene Central Rams.

This past baseball season fell apart, but Godwin’s three years at the helm have still been nothing short of spectacular. He won an American Athletic Conference title in his first season. In year No. 2, Godwin helped bring the Pirates as close to the College World Series as they’ve ever been.

Of course, Compher’s next big decision was dismissing McNeill and hiring Scottie Montgomery away from Duke. The decision initially caused an uproar. McNeill was a Pirate himself. While he fell short of expectations when it came to competing in the conference, he had dominated ACC opponents and was fresh off a modest 5-7 season that was mostly the product of injuries.

Last fall was Montgomery’s first season at the helm. The Pirates only managed three wins. Between that showing on the gridiron, another below-average basketball season and the baseball team coming nowhere near its preseason top-10 potential, Compher was the recipient of a lot of fan criticism.

For football, Montgomery’s recent supremacy on the recruiting trail speaks volumes on what he brings to the program. Last year was his first as a head coach. These next two season will tell a lot about Compher’s ability to hire a coach for ECU’s most lucrative sport.

Basketball will need to show signs of at least marginal improvement in terms of competing in the AAC. With baseball, most expect the Pirates to put last season behind them. There’s a big turnover in talent, but Godwin has recruited well in his time here.

Other things to consider about Compher’s tenure thus far are the swim team’s control over the AAC and his starting a women’s lacrosse program.

The five-year term of Compher’s extension are a bit questionable, especially when one considers the recent lack of success. However, there’s a strong argument that Compher has earned an extension.

ECU fans have been split over the matter, but that’s nothing that some winning won’t cure.