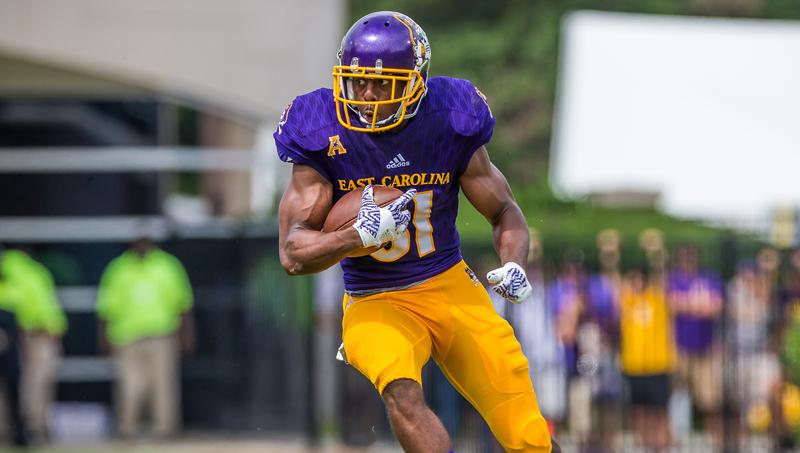 Jimmy Williams keeps his head up as he makes a catch and drives down the field during a game last season. Williams, a Pam Pack product, was named to the Biletnikoff Award watch list. (ECU Athletics Communications/Contributed)

Williams, who was granted a medical hardship waiver by the league office on Dec. 13, 2016, started all 12 games for the Pirates a year ago, tallying 45 receptions for 818 yards and eight touchdowns. He turned in three 100-yard receiving performances, which included a career-high 179-yard effort at Virginia Tech. Williams stood first on the team in touchdowns and yards per catch (18.2), while ranking second in yardage and third in receptions.

For his career, Williams has played in 30 career games (19 starts), catching 87 passes for 1,275 yards (14.7 ypr) with 11 touchdowns. He has produced 23 multiple-catch contests and made at least one reception in 28 outings, which includes a streak of 13 straight. The Washington native is a two-time (2015-16) winner of ECU’s Rock Roggeman Heart-of-the-Pirate Award for display of leadership, spirit and inspiration.

Since 2006, ECU receivers have been included on the Biletnikoff Award Watch List on nine occasions. Williams’ selection follows Justin Hardy (2012-14), Zay Jones (2015-16), Lance Lewis (2011), Dwayne Harris (2010) and Aundrae Allison (2006). A year ago, Jones became the first Pirate receiver to be named a finalist for the prestigious award.

The Biletnikoff Award, presented by the Tallahassee Quarterback Club (TQC) Foundation, annually recognizes the outstanding receiver, not merely a wide receiver, and the award recipient is selected by the highly distinguished Biletnikoff Award National Selection Committee, a group of over 200 prominent college football journalists, commentators and former receivers. Receivers may be added to the watch list as their season performances dictate. Ten semifinalists will be announced Nov. 13 before three finalists are declared Nov. 21. The 2017 winner will be presented live on Dec. 7 on The Home Depot College Football Awards Show, which will be aired on ESPN.

In the classroom, Grayson earned his bachelor’s degree in sport studies on and is currently working on a second degree in family and community services. Grayson has also volunteered his time in the community working with programs such as the James & Connie Maynard Children’s Hospital/Vidant Medical Center (patient visitation), Food Bank of Eastern North Carolina (packing/distribution of food to needy families) and Third Street Community Center Field Day, while working 40 hours a week as an intern in the ECU Athletics Marketing and Fan Engagement department during the spring of 2017.

The Wuerffel Trophy, known as “College Football’s Premier Award for Community Service,” is presented annually by the All Sports Association in Fort Walton Beach, Fla. Named after 1996 Heisman Trophy winning quarterback Danny Wuerffel from the University of Florida, the Wuerffel Trophy is awarded to the FBS player that best combines exemplary community service with athletic and academic achievement.

Voting for the Wuerffel Trophy is performed by a National Selection Committee that includes college football television and print media, industry notables, former head coaches and prior Wuerffel Trophy recipients.

The formal announcement of the 2017 recipient will be made at the National Football Foundation’s press conference in New York City on Dec. 5. The presentation of the 2017 Wuerffel Trophy will occur at the 49th Annual All Sports Association Awards Banquet on Feb. 16, 2018 in Fort Walton Beach, Fla.