Montgomery, Sirk as tight-knit as they come 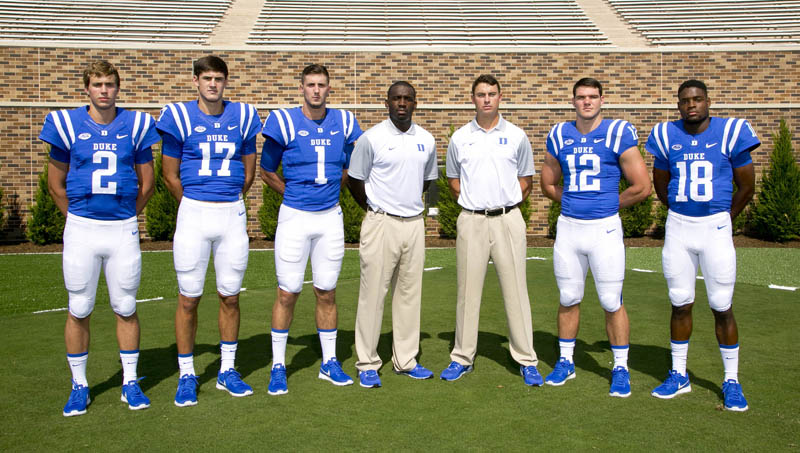 Scottie Montgomery (middle) is pictured with Thomas Sirk (No. 1) and other Duke quarterbacks. Montgomery and Sirk grew close during their time at Duke and are now reunited at ECU. (Duke Athletics/Contributed) (Photo by Duke Photography)

GREENVILLE — It’s no secret that second-year East Carolina football coach Scottie Montgomery and Thomas Sirk go way back. Montgomery served as the Blue Devils’ offensive coordinator as Sirk worked his way up the depth chart in 2014 and into the starting role in 2015.

The two parted ways when Montgomery was named ECU’s head coach in December 2015, but he and Sirk were recently reunited when the former Duke signal caller elected to transfer to ECU as a graduate for his final year of eligibility.

Adding Sirk to the mix has at least added competition at the quarterback position. While he brings experience and talent to the table, his health and the performance of Gardner Minshew makes it a bit tough to peg who will start under center against James Madison in less than six weeks.

From his time at Duke, Montgomery knows exactly what qualities Sirk brings to the program. He saw the talented, mobile quarterback grow into someone the Blue Devils couldn’t keep off the field.

“He worked really hard. He did everything we asked him to do, and he earned the right to play,” Montgomery said. Sirk, after recovering from a ruptured right Achilles tendon in 2013, was firmly entrenched as the backup to all-ACC quarterback Anthony Boone.

“We did a lot of things with Thomas, and we realized quickly that Thomas was a leader and a competitor — a fierce competitor,” Montgomery continued. “What we found out, as the year went on, was more ways to get him involved in the offense.” 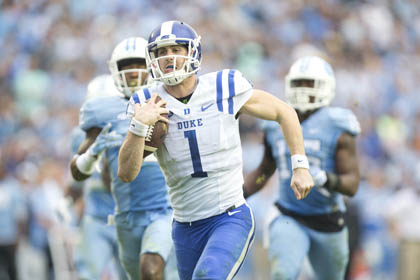 Thomas Sirk takes off during a 2015 game against North Carolina. The mobile quarterback could be a difference maker for the Pirates should he land the starting role and stay healthy. (Duke Athletics/Contributed)
(Jon Gardiner/Duke Photography)

Backing up a player like Boone would generally mean, in the best case, very limited playing time. Not for Sirk, though. He practically forced Montgomery into a two-quarterback system — a concept foreign to a coach that had previously served on the Pittsburgh Steelers staff.

“I had never been part of a two-quarterback, any type of system whatsoever. He had to make me want it,” Montgomery said. “Coming from the National Football League, if we even thought about putting anybody in other than Ben Roethlisberger, we should all jump off the hot metal bridge and just forget about it.

“… We had an unbelievable talent with Anthony Boone at the same time. I think that his role grew. Before we knew it, we knew he could maintain a game as a starting quarterback.”

Sirk played in 12 of 13 games that season, only missing a Sept. 27, 2014 trip to Miami because of sickness. He became a go-to red-zone option for Duke as he led the team with eight rushing touchdowns. He amassed 238 yards on the ground and completed 10-of-14 passes for 67 yards and another three touchdowns — all while officially the No. 2 quarterback behind Boone.

Montgomery’s assessment was right. Sirk could handle the starting role. He quarterbacked Duke to an 8-5 season in 2015 that included a win over Indiana in the Pinstripe Bowl. Sirk connected on 251-of-427 passes for 2,625 yards and 16 touchdowns. He hit the ground 163 times for 803 yards and eight more touchdowns.

That was the last dose of football Sirk experienced. After injuring his right Achilles tendon almost three years prior, he ruptured his left Achilles in February 2016. He underwent surgery, but suffered a partial tear mere days before the 2016 season opener.

“I think I was here on the job a few weeks,” Montgomery recalled of the initial injury in early 2016. “I was trying to move back and forth … and I got a call that he had popped it. I drove back up to go see him and just wanted to hug him. … That’s the type of relationship we have.”

If Sirk’s health holds up, Montgomery trusts him to lead the Pirate offense. That doesn’t mean the job is his, though. Montgomery’s job as head coach is to develop close relationships with his players. His past as an offensive coordinator leads him to grow particularly close with quarterbacks.

Minshew has Montgomery’s trust, too. He fared well when being thrown into the fire when starter Phillip Nelson got banged up last year. Now Minshew has a full offseason to learn the ins and outs of the offense instead of having to learn on the fly. It should be a stiff battle between the two, but competition breeds excellence.