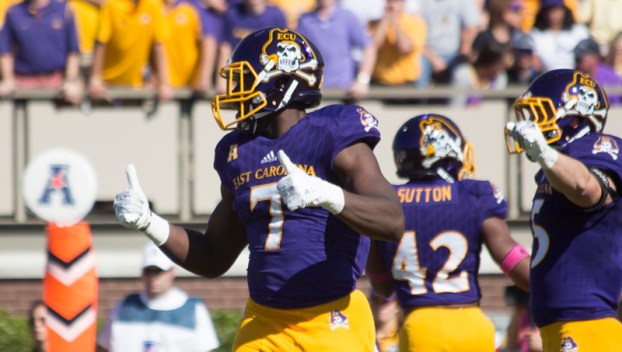 Jordan Williams gives a teammate thumbs up after a good play during a game last season. (Chris Rawls/WDN)

It’s said that offenses win games, but the defense wins championships. This season, East Carolina is putting this to the test as they move to a 4-2-5 defensive scheme with returning linebacker Jordan Williams leading the way.

The new system isn’t actually all that new. The Pirates rolled it out in the spring. Before then, it was a package they’d use in third-down situations.

This scheme will be taking a linebacker out of the formation and adding an extra defensive back. Several ECU coaches said that the idea was to have the best athletes on the field, and this defensive scheme allows that to happen.

“We want to try and get our best football players on the field,” defensive coordinator Kenwick Thompson said. “It’s not about what we play, it’s more about how we play. We want to play fast and physical, smart and create turnovers and takeaways.”

Senior linebacker Jordan Williams will lead those changes. He began his collegiate career at Shaw University in 2013 before transferring to ECU in 2014. In his first season with ECU, Williams played in nine games primarily with special teams, but he quickly made his way into a starting linebacker spot in 2015 with 10 starts at the “buck” inside-linebacker position.

After leading the Pirates in tackles (77) last season, Williams has secured his spot on the field in 2017. Head coach Scottie Montgomery said that his communication skills have also improved, which will help on the field.

During his junior campaign, Williams tallied two games with double-digit tackles: 10 against Western Carolina and 12 against Southern Methodist. He also picked up a sack against American Athletic Conference rival, Connecticut.

As a senior, Williams has stepped into a leadership role on the team, and he said that he embraces it.

“I’d say that being an older guy, the younger guys follow you automatically,” Williams said. “So I just embrace that role. I take it on and lead the team.”

Although change can sometimes come with doubts, Williams said that he feels the change to the defensive scheme will be positive for the team and lead to more wins in the 2017 season.

“I feel like, defensively, we set a few plays so guys know what they’re doing so we can go 100 percent,” Williams said. “I feel like that’s definitely going to help us win ball games this year.”

When it comes to Williams, coaches have said that he has embraced his role as a leader. With any kind of change on the field, that leadership will be important in the Pirates’ success in 2017.

“He looks and he sees all the young guys, and that was him a couple years ago. He looks around and he sees that,” inside linebackers coach Ryan Anderson said. “That was the biggest thing I challenged him with this offseason. I told him, ‘You’re going to be a leader this year. It’s your time.’ And he’s done a great job running with it.”