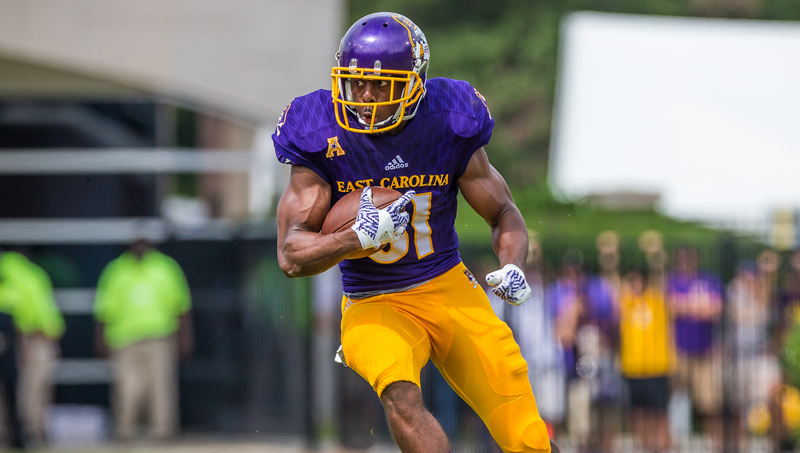 Part-time 2016 starter Gardner Minshew and Duke transfer Thomas Sirk are battling to determine who will start at quarterback on Sept. 2 when ECU hosts James Madison. Minshew saw some starting action in 2016. This offseason marked his first chance to slow down and figure out the ins and outs of the Pirate offense. Sirk, on the other hand, is a dual threat. The coaching staff all said the 23-year-old former Blue Devil is 100 percent after a slew of Achilles tendon injuries. While head coach Scottie Montgomery said he wants one man at quarterback, Sirk can be a red-zone threat should Minshew win the starting role. 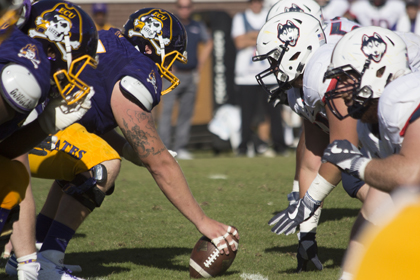 Montgomery tabbed junior Garrett McGhin as the leader of this offensive line. The hope is that not only can this front protect the quarterback better, but also improve on its pass protection. Montgomery wants to see the ball get out quicker. Brandon Smith, at 6-foot-8 and 327 pounds, brings size and length to the right tackle position. Those two are more mature players, but the coaches are also looking for sophomore D’Ante Smith to take the next step at left tackle. He is one of a handful of younger players that could add depth to the offensive line.

Two transfers appear to be the front runners in the Pirate running back committee. Clemson graduate transfer Tyshon Dye has dazzled with his shiftiness during the early parts of the preseason. Montgomery said the 5-foot-11, 220-pound back has the feet of a 180 pounder. Eastern North Carolina product Derrell Scott, who played his high school football at Havelock, has cut his body down to a lean 194 pounds. His vision and explosiveness made him one of the standouts of the spring scrimmage. Behind those two are other capable players like Devin Anderson and Hussein Howe. Anthony Scott was ruled academically ineligible for the season.

Trevon Brown got his academics cleaned up to be eligible this season, but has been hampered since spring with a lingering injury. His status remains up in the air, which changes the landscape of the receiving corps. Brown brings explosiveness as a deep threat. The Pirates still boast an impressive collection of pass catchers. Pam Pack product Jimmy Williams was a strong complement to Zay Jones in 2016. Without Brown, Williams will slot into the No. 1 role. He’ll have other playmakers like Davon Grayson lined up opposite of him, and Quay Johnson in the slot. Others, like a lengthy Terrell Green, are fighting for increased responsibilities.

Montgomery and company hope that senior Stephen Baggett can revitalize a group that was quiet last year. Montgomery believes that Baggett’s experience in the system will help him understand exactly what the position means to the offense. Baggett is a player that got to learn under Bryce Williams, who was recently signed to the Carolina Panthers. ECU has another senior tight end in Devin Carlos. The Pirates are also hoping to see growth from sophomore Anthony Watley.

Over the course of one year, ECU’s defensive line went from being a trouble area to one of its deeper positions. Junior college and graduate transfers will help fill gaps and add immediate help as a young group of linemen matures. Gaelin Elmore — a 6-foot-6, 275-pound Minnesota transfer — is expected to take on a key role on the defensive front. Two other graduates in Mike Myers and Randall Anderson add experience. ECU’s defensive line was worn down during the latter stages of the season because of lack of depth. Montgomery hopes to see roughly twice as many players see significant action this season so the entire unit is fresher come November. Junior Yiannis Bowden is academically ineligible.

ECU’s defense is shifting to a 4-2-5 scheme so as to cover more space in the secondary. The change will help keep fresher linebackers on the field. However, pressuring the quarterback was a weak point of the front last season, so aggression will be a point of emphasis. Jordan Williams will be running the show on defense. The Fayetteville native led the Pirates in tackling in 2016. Defensive coordinator Kenwick Thompson said Williams spent a lot of last season learning on the job, so he and Montgomery are expecting a big campaign from the senior. He and Ray Tillman will see a lot of the field, but also have a handful of capable upperclassmen behind them.

The amount of talent in the secondary is one of the reasons for the change to a 4-2-5 scheme. Pirate mainstays Corey Seargent and Bobby Fulp look to lead a group featuring a number of transfers and younger players. Fulp seemed locked into the strong-safety role in camp while Korrin Wiggins, formerly of Clemson, slotted in at free safety during camp. That leaves Auburn transfer Tim Irvin, who sat out last season, to be moved around. The likes of graduate transfer Travon Simmons and sophomore Colby Gore add more than just depth.

Sophomore Jake Verity was ready to handle placekicking and punting duties this season. The Pirates ended up locking down Eastern Michigan graduate transfer Austin Barnes just before camp started up. He’s impressed with his punting early in the preseason. When it comes to the return game, Scottie Montgomery and coordinator Shannon Moore are committed to finding the most athletic players to put in the back fielding punts and kickoffs. They hope focusing on fundamentals and learning from last year will help provide the consistency that was absent in 2016.