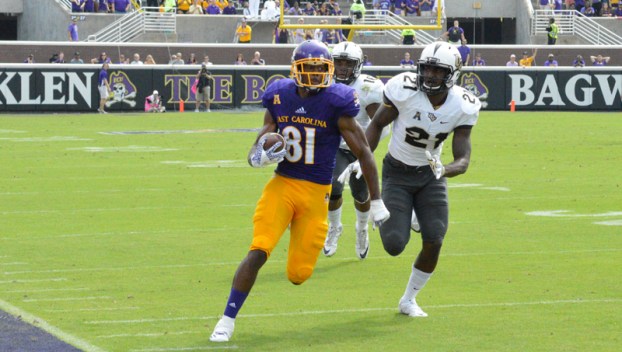 Jimmy Williams has been preparing for this since his days in the blue and white at Washington. His days as Pam Pack quarterback gave him the drive to be a go-to playmaker in Division I college football.

Now, in his final season of eligibility, Williams enters 2017 as East Carolina’s top receiver. He ranked second behind second-round draft pick Zay Jones with 45 catches for 818 yards, and his eight touchdowns tied Jones for best on the team.

Williams has one of the top receiver jobs locked down. He’s had the mindset of being a top guy, but practices and plays like he always has something to prove.

“I never practice that way. I go out and give my full, everything I’ve got in everything I do,” Williams said. “… I’m going to bring it every single day as if I’m not starting. That’s how I like to live as far as the football field goes. You’ve got to practice like you’re a two or you’re a three. That’s the only way you’re going to get better.”

And he has gotten better. Williams, a former walk on, earned a scholarship in 2014. With Jones lined up opposite him, Williams was able to gash opposing defenses for an average of 18.2 yards per catch in 2016. Now he has another experienced pass catcher in Davon Grayson beside him, and Quay Johnson dashing through the slot. There are numerous targets on the field, but Williams knows he had to continue improving to shoulder the responsibilities of being the No. 1 receiver.

As important to working his way to the success he enjoyed last season was staying healthy. Williams has struggled with injuries since high school. In fact, last season would have been his last if not for a medical-hardship waiver granted by the NCAA.

“To get through that, that’s why you have your teammates,” Williams said. “You go down, they were calling me and texting me. Coaches were calling me, texting me, making sure I’m at meetings and at lifts. They were keeping me around even though I wasn’t playing. I feel like that kept me up a lot.

“Even my friends back at home. They talked to me and told me I’d be all right. My mom, just telling me to keep my faith. I just feel like, when I did get hurt, I would get down. The people I had around never allowed me to lose my faith.”

Faith, skill, and a lot of hard work have led Williams to this point. His athleticism, work ethic and leadership are the perfect storm to make this ECU receiving corps even better than last season’s that was led by college football’s most prolific pass catcher.

It’s said that offenses win games, but the defense wins championships. This season, East Carolina is putting this to the... read more