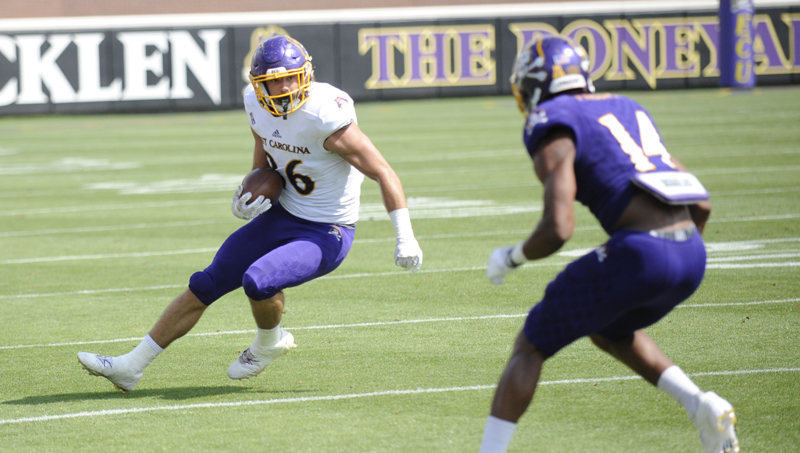 Stephen Baggett trudges down the field during ECU’s spring scrimmage in April.

GREENVILLE — When East Carolina kicks off the football season Saturday against James Madison, special teams coordinator and tight ends coach Shannon Moore is hoping that two of the team’s weakest areas can perhaps be strengths this year.

Special teams were arguably the Pirates’ most inconsistent unit in 2016. ECU’s lopsided loss at Virginia Tech sparked a series of games in which the specialists struggled. The Hokies struck first in that Sept. 24, 2016 meeting with an 87-yard punt return. They never looked back as they shellacked the Pirates, 54-17.

ECU opened the scoring the following week. Deondre Farrier hauled in a 16-yard touchdown from Phillip Nelson, but Central Florida responded immediately with a coast-to-coast kickoff return by Adrian Killins. The Knights walked away with a 47-29 win.

The placekicker spot was a revolving door of sorts. It would be senior Davis Plowman one week and freshman Jake Verity the next. Now that Plowman has graduated, it’s up to Verity and Caleb Pratt.

“I think Jake and Caleb both hit the ball well on field goals,” Moore said. “They get the ball up and give us good distance on it. We just need to keep stressing their accuracy.”

Verity actually spent the offseason preparing as if he would have to handle punting duties, too, after Worth Gregory’s graduation. He was relieved of that pressure after ECU welcomed in Eastern Michigan graduate transfer Austin Barnes.

Punting and how offense bleeds into special teams is going to be an area of renewed focus for the Pirates. Head coach Scottie Montgomery has stressed to his quarterbacks that throwing the ball out of bounds when there’s no play available is the smart play to make. The worst-case scenario is punting the ball away, which Montgomery says is the longest play a team can make on a consistent basis.

While special teams were inconsistent at best last year, the tight end position was largely a non-factor in ECU’s offense. It was a departure from the years of having Bryce Williams plowing through linebackers after making a catch over the middle.

Senior Stephen Baggett was once Williams’ understudy. He finished the 2016 campaign with just five catches for 62 yards. He hopes to get more involved in the offense this year.

“I probably have a better grasp of the in-the-box plays. Before, the offense, we were more split out,” he explained. “Having a whole year of experience with that helps. Wherever they put me, I’ll give it my all and take advantage of my opportunities.

“… The one thing I think (Williams) did really well was he is a hard runner. He would get the ball in his hands and he ran really hard. That’s something that every tight end has got to have. I’m looking forward to being able to prove that when I get the ball in my hands.”

Depth and knowing the players better is something Moore said will help improvement in these two areas. He and his players have a better relationship than they did this time last year, and the Pirates have a much better understanding of the overall system going into this campaign.