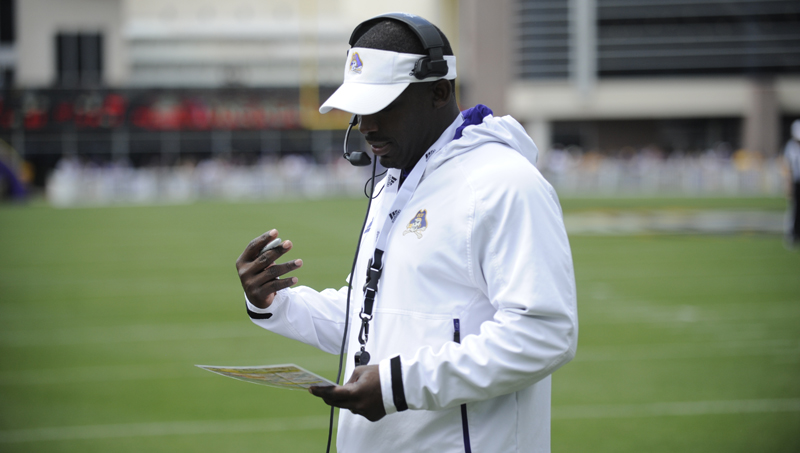 ECU coach Scottie Montgomery talks strategy over the headset during the spring scrimmage back in April.

GREENVILLE — A familiar feeling is in the air. Focus has shifted away from East Carolina looking within to preparing for Saturday’s season opener against defending FCS champion James Madison.

It’s been a long time coming for second-year head coach Scottie Montgomery, his staff, and a Pirates’ squad that looks different across the board. They’re hoping to make strides after a three-win campaign in 2016. Veterans at wide receiver like Washington native Jimmy Williams and Davon Grayson will lead a group of lesser-known playmakers.

New or old, everyone in the program has been looking forward to this week since ECU’s Nov. 26, 2016 loss at Temple.

“Since we left Philadelphia and the way we felt in our stomachs when we left the field at Temple, we’ve been looking forward to this moment,” Montgomery said at his Monday press conference. “For our team, it’s been about pure focus to get to this point.”

The Dukes had a Division I-AA title to propel them into the offseason. The Pirates, on the other hand, had much less momentum coming out of their 2016 season. Montgomery said that their mission heading into 2017 was to build team chemistry.

“Team chemistry builds the moment you leave the field and not when you’re on the field, because you need to know you trust the people around you,” he said. “We’re looking forward to that.”

The players’ relationships with one another was exemplified by them wanting to spend their last Saturday before the season together. Instead of hanging out with their friends outside the team or going home to see their family, they opted to get together and watch the Floyd Mayweather-Conor McGregor boxing match.

“They came to me — and I never saw it coming — all of them, they voted and wanted to watch the fight all together,” Montgomery said. “When you get the whole team that says they want to do one thing on their only real weekend off, that’s special. … They were all crammed in there on top of each other, and they enjoyed each other.”

What to know heading into Week 1:

Rose product Mydreon Vines racked up over 180 yards receiving in ECU’s two scrimmages. The freshman positioned himself well to see some playing time right off the bat this season. According to the depth chart, Vines is the top backup to Davon Grayson at the “X” receiver position.

Trevon Brown, Colby Gore and Malik Gray will sit out the first game:

Montgomery said that wide receiver Trevon Brown, defensive back Colby Gore and wide receiver Malik Gray will all miss ECU’s opener on Saturday. All three, however, are set to be cleared for physical contact this week, and should be available to play in the coming weeks.

Pirates young in the trenches:

Garrett McGhin at center and Brandon Smith at right tackle will anchor an otherwise youthful offensive line. Two sophomores (Cortez Herrin and D’Ante Smith) and a freshman (Austin Lee) are set to start at the other three slots. On the defensive line, sophomores Kendall Futrell and Alex Turner are set to man starting roles, too.