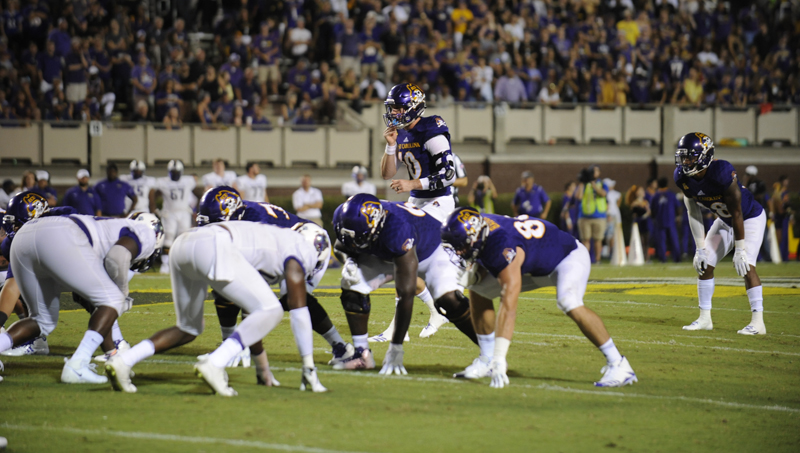 Thomas Sirk makes a call at the line of scrimmage during ECU’s loss to James Madison. Sirk left the game at West Virginia with an injury, and the Pirates were throttled, 56-20.

MORGANTOWN, W. Va. — East Carolina’s secondary had no answer for the quarterback-receiver tandem of Will Grier and David Sills. Grier completed 19-of-25 passes for 352 yards and five touchdowns. Sills nabbed seven of those passes, amassing 152 yards and three trips to the end zone as West Virginia throttled ECU, 56-20.

It was a historically dismal outing for a Pirate crew that conceded 49 points in the first half. It’s the most in modern history for the program. WVU had six passing plays for 15 or more yards in the first 30 minutes. Many of them went for much more than that: Marcus Simms’ 52-yard touchdown 2:30 into the second quarter and Sills’ 75-yard score with 30 seconds left before halftime.

Bobby Fulp was unable to defend Simms, Sills and the rest of the Mountaineer receivers. It didn’t seem to matter which way Grier threw the ball, though. WVU had touchdowns on each of its first five drives. At 2:16, its first series was the longest of the bunch.

ECU got a field goal from Jake Verity on its first possession. The Pirates would be held off of the scoreboard in their next seven drives. Three ended in punts, two saw starting quarterback Thomas Sirk get intercepted and one resulted in a turnover on downs.

The Pirates regrouped at halftime. Their offense began to find a rhythm once the game with the game out of reach. Jimmy Williams capped off a seven-play drive with a 19-yard touchdown catch from Sirk, marking ECU’s first aerial score of the season.

Sirk left the game in the second half after taking a stiff hit. Gardner Minshew, who started in the season-opening loss to James Madison, looked more comfortable when he entered the game in relief. He nailed Trevon Brown for the longest touchdown connection in program history — a 95-yard bomb in the fourth quarter.

ECU drops to 0-2. The loss marked the second game in a row that the Pirate defense was torched for over 600 yards. It let James Madison collect 422 yards on the ground (614 total). The Mountaineers had 403 yards in the air (619 total).

Next up for ECU is a home meeting with rival Virginia Tech, which beat WVU in Week 1.