Stepping Up: ECU needs some sort of consistency 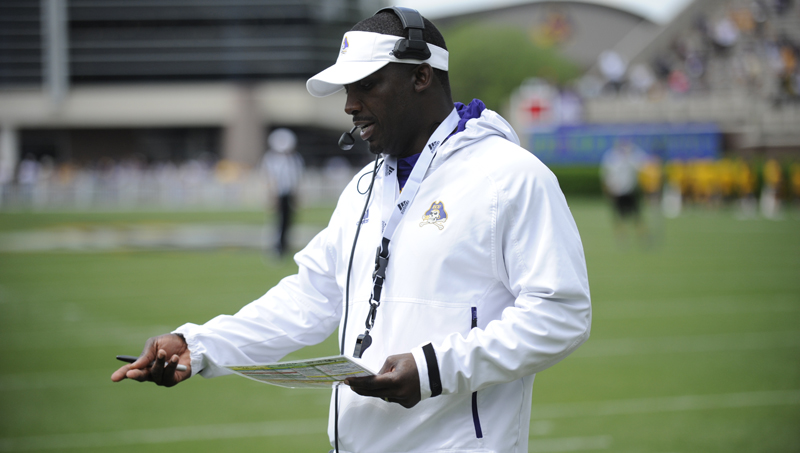 ECU head coach Scottie Montgomery gets feedback from his staff during the spring scrimmage back in April.

East Carolina announced Sunday afternoon that defensive line coach Robert Prunty, new to the program this season, would be taking over as defensive coordinator for Kenwick Thompson. It’s the first change head coach Scottie Montgomery has made to his staff after starting the season 0-2 with decisive losses to FCS opponent James Madison and, most recently, West Virginia.

Yes, it was the first change to the coaching staff, but it’s another addition to a long list over overall changes that have been made over just two weeks. The Pirates are searching for answers to questions all over the field.

It started with a lackluster offensive performance at home against James Madison. Struggles on the offensive line stymied the run game and affected quarterback play in Week 1. Junior captain and center Garrett McGhin had a handful of errant snaps. The entire unit struggled to block effectively for starting running back Derrell Scott.

McGhin was moved from center to left guard. True freshman John Spellacy slotted in at center. At running back, Clemson graduate transfer Tyshon Dye saw plenty of action after not getting a carry in the season opener.

Adjustments need to be made when ECU’s defense gives up over 1,200 yards in its first two games and its offense struggles to produce. At the same time, though, the Pirates need consistency — especially this early in the season.

It’s a luxury they haven’t had in years. It started back in the 2015 season. Lincoln Riley, now the head coach at Oklahoma, departed to serve as offensive coordinator under Bob Stoops. That kind of turnover doesn’t derail an entire program. However, that, combined with Kurt Benkert’s injury before the 2015 season and the ensuing quarterback carousel, created all sorts of inconsistency on offense.

The Pirates haven’t had a steady signal caller since then. James Summers and Blake Kemp split duties that season. Last year, poor protection of Phillip Nelson led to him getting injured and Minshew starting four games.

The coaching staff has also been liquid. Scottie Montgomery took over as head coach once Ruffin McNeill was dismissed going 5-7 in that 2015 season. Turnover has continued among position coaches, though. ECU has new coaches for defensive backs, running backs, wide receivers and the defensive line.

It’s been start and stop in a lot of areas. Consistency on the field lends itself to better chemistry. Consistency on the coaching staff helps better establish a culture: expectations, habits, and more. With both of those absent, ECU’s football program will continue to have more questions than answers.