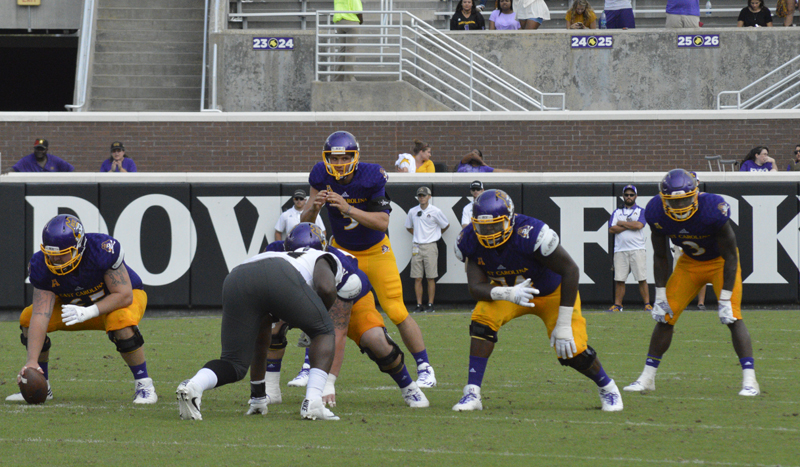 ECU’s offensive line sets up shop in front of Gardner Minshew during a game against Central Florida last season.

GREENVILLE — East Carolina’s football program has enjoyed little consistency since the end of the 2014 season. Whether it was the transition from Ruffin McNeill to Scottie Montgomery, or the annual struggle to keep quarterbacks healthy, it’s been an issue that has plagued various aspects of the program.

A lot of the inconsistencies over the past few seasons have been concentrated on the offensive side of the ball. Plenty of changes have been made along the offensive line through just two weeks. Garrett McGhin, who was named a captain heading into the season, couldn’t snap the ball effectively against the Dukes. That led to him being shifted from center to guard and true freshman John Spellacy playing center.

Spellacy, despite one errant snap in a raucous road atmosphere, did well last weekend. ECU is hoping it can now settle on a starting offensive line and rotation of backups.

“Spellacy, I’m settled on him at center. At tackles, we gained (junior) Messiah (Rice) back, so we’ll get him in the rotation,” offensive line coach Geep Wade said. “Inside, we’re still a little banged up, so we’re not completely set.”

Rice, who was suspended for the first game, was moved from left to right tackle. McGhin was moved after spending the preseason at center. Even as fluid as it is across the offensive line, the players are confident in their ability to play alongside each other wherever and whenever they’re slotted in. They’re not making excuses. Rather, they’re aiming to make the best of the hand they’ve been dealt.

Behind the line, ECU hasn’t had a true No. 1 quarterback since Shane Carden graduated. Kurt Benkert got injured before the 2015 opener, leaving the duo of Blake Kemp and James Summers to fill the void. Phillip Nelson was a sure-fire starter in 2016, but poor protection up front helped lead to a bevy of injuries and, in turn, Gardner Minshew starting four games.

Minshew won the starting role in preseason camp this year. It didn’t last long, though, as he was yanked in favor of Duke transfer Thomas Sirk after just a few lackluster plays in the first half of the season-opening loss to James Madison. Minshew was slotted into the top role again once the Mountaineers roughed up Sirk.

“Both games, we’ve played two quarterbacks. We might continue to play two quarterbacks at times,” offensive coordinator Tony Petersen said. “That just might be the way it is. We play some different linemen, but we’ll be O.K. there. We just got to consistently take care of the football. We’ve got to be able to run the football, no matter who we’re playing against.”

Having a different player under center and calling the shots should change things, but McGhin said it’s “just another voice” to them.

There are a lot of things that have already spun out of control for this Pirate football team. Even so, the offensive line — as steady and tough a group of players one will find on a football team — continues to trudge along, doing what it can given the circumstances.