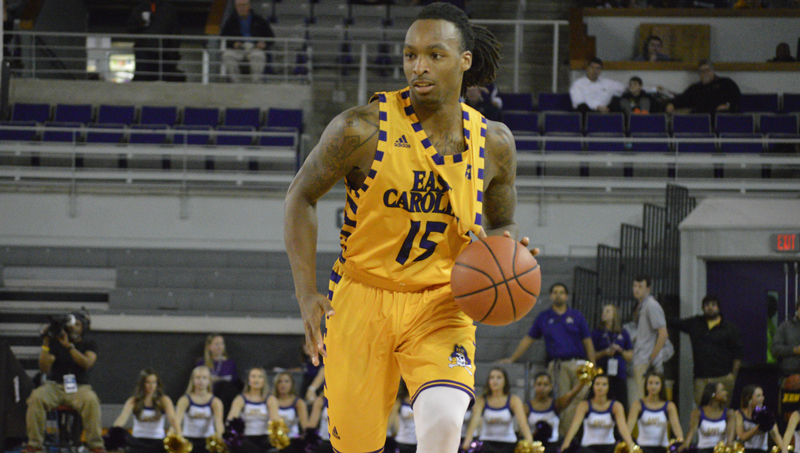 Kentrell Barkley carries the ball up the court in a game last season.

GREENVILLE — East Carolina’s basketball program is changing just like the entire landscape of college basketball is changing. Just before preseason practices were set to open, news broke that the FBI was accusing a handful of NCAA teams for bribery and fraud in an alleged corruption scheme with Adidas.

Allegations have brought in Atlantic Coast Conference schools Miami and Louisville. It’s dealt a blow to teams in the upper echelon of college basketball, but will be one unlike any other.

Corruption of this kind is not unfamiliar territory in the NCAA. Having the FBI leading investigations is. The Pirates and every other team in the NCAA will now attempt to navigate this new terrain.

ECU faces plenty of internal changes, too. The Pirates opened practice Sunday with a new assistant coach in Doug Wojcik and a host of new faces on the roster.

Wojcik has been on staff at North Carolina, Notre Dame, Michigan State and, most recently, Gonzaga. He is also a former head coach at Tulsa and College of Charleston.

“We have a couple of guys like a grad transfer in Aaron, who I think is going to be a terrific defensive player for us,” Lebo said. “He’s been in a winning program. Seth … we’re waiting to hear news from him with the NCAA. Hopefully we can get him eligible this year. He’ll make a big difference if he can.”

Senior B.J. Tyson and junior Kentrell Barkley will undoubtedly be the leaders for this year’s team. They will need to help bring along these newer players so as to curb the loss of key players in Caleb White and Andre Washington, as well Michel Nzege, who was a stud off the bench.

“Last year was really tough when I went down, but I stayed in there and helped my teammates out,” said Tyson, who was injured for a portion of his junior campaign. “This year, I’m healthy and I feel 100 percent.”

Nzege and Washington’s graduations depleted a forward corps that, for the first time, was able to hold its own in the American Athletic Conference. ECU will look to the 6-foot-10 senior Jabari Craig to fill the void. Barkley, as he has proved, will be able to pick up the slack on the boards.

“I’m just ready to get going and show my drive, my motor and my love for the game,” Barkley said. “If I see the ball, I’m going to try my best to go get it. That doesn’t change. I have a knack for the ball, and that’s a gift from God.”

ECU opens the season Nov. 12 when it hosts Coppin State. It will play 10 of 11 non-conference games at home before beginning AAC play at Tulsa Dec. 28.

ECU’s offense shows signs of life in loss to…