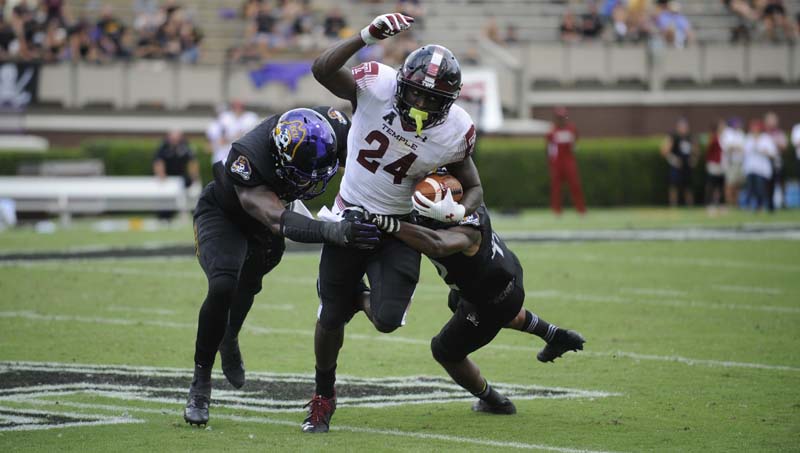 GREENVILLE — East Carolina was poised to turn a corner Saturday when it hosted Temple. The offense had been coming together, and while the defense was still suspect, it was matched up against an Owl offense facing many struggles of its own.

Instead, the Pirates came out stagnant in front of a home crowd consisting more of empty purple seats than fans donning dark apparel for the “blackout” gimmick. Quarterback Thomas Sirk was ineffective running the ball. Jimmy Williams had 110 yards receiving, but even he struggled to make plays like the rest of the receiving corps.

Discipline proved an issue for both sides. Both ECU and Temple were flagged eight times. Bobby Fulp alone backed the Pirates up 28 yards on Temple’s second series. In all, ECU had more penalty yards (96) than rushing yards (34).

“Outside of the game, the one thing I’m most disappointed about is discipline,” head coach Scottie Montgomery said. “The foundation of the program talked about conditioning and discipline. We didn’t have that today.”

Offensive woes began with Sirk being unable to move the ball on the ground. He ran nine times for a loss of 14 yards a week after leading the Pirates on the ground as they held their own against South Florida for the better part of three quarters.

As has become typical of the Pirates, they looked good at the onset. Sirk and true freshman Darius Pinnix moved well on the ground. Williams had a 20-yard grab. The offense was buzzing, but was forced to settle for a Jake Verity field goal on its first drive.

Those were the only three points of the quarter. Temple got in its own way often enough, but ECU’s offense also displayed some rare playmaking. Red-shirt freshman linebacker Aaron Ramseur, in his first career start, picked off Logan Marchi two yards shy from the end zone he was protecting.

The Owls ran away with the game in the second quarter. They got a tying field goal early on. Marchi then wrapped up a nine-play, 91-yard drive with a touchdown pass to Adonis Jennings. ECU went three-and-out on its next drive. Marchi went deep to Jennings for a 25-yard gain, setting up a 2-yard scamper by David Hood.

Another short run into the end zone by Rob Ritrovato made it a three-touchdown second quarter. The Pirates were down, 24-3, before they knew it.

“We didn’t do the right things on the field, as far as execution and as far as discipline and all of that,” Williams said. “We just didn’t do it. It just didn’t happen.”

Sirk closed the gap to two possessions, 24-10, thanks to an 11-yard connection with Quay Johnson.

And the Pirates went out with a whimper. They had four yards of offense in the fourth quarter. Austin Barnes punted the ball six times as ECU only converted on 3-of-14 third downs.

Now, after weeks of building their offense up, the Pirates have to take a product that is struggling in every phase of the game down to nationally ranked Central Florida.