ECU picks up first home win in nearly a year 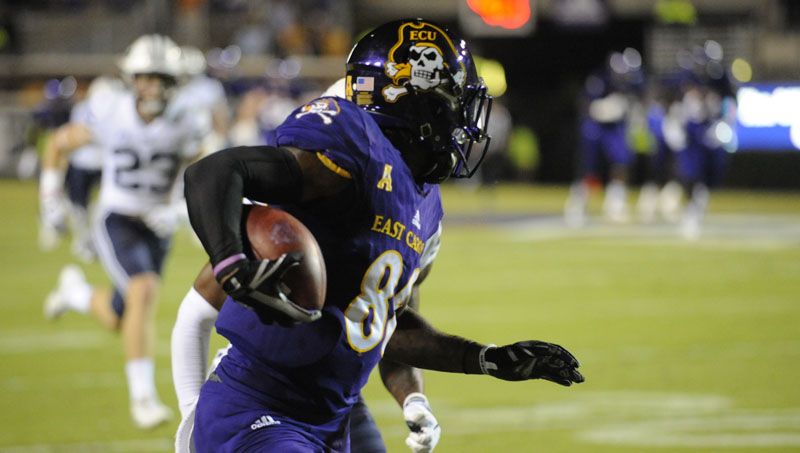 GREENVILLE — East Carolina fumbled the ball away on its second offensive play of the game, giving Brigham Young just 28 yards to cover for the first touchdown of Saturday’s homecoming meeting. The Pirates, after falling behind, scored 33 of the next 36 points en route to a 33-17 win.

But it felt like a glimpse into the not-too-distant past in a lot of ways. Fans largely dispersed by the time the game was over — not because the Pirates were getting steamrolled, but because they had all but sealed a win over the Cougars. ECU never trailed after a 42-yard field goal by Jake Verity broke a 10-10 tie.

“No where in America can you be 1-6, show up, and have the reception that we had out here in Dowdy-Ficklen Stadium,” head coach Scottie Montgomery said. “There’s no question what we have here in Greenville. … Our Pirate fans are the real deal.”

Defensively, the Pirates put together their best game of the season against a struggling BYU offense. Redshirt freshman linebacker Aaron Ramseur had another masterful performance as he notched a game-best 12 takedowns. Devon Sutton and Jordan Williams each had 10.

It had a lot to do with the way the defensive momentum would flow to the offense and then back to the defense. ECU’s defense, in a 10-10 tie, made three-straight stops to begin the second half. Its offense turned around and got two field goals from Verity and a 26-yard touchdown connection from Gardner Minshew to Trevon Brown.

“We won. The specialists, together, we scored 15 points,” Verity said. “I scored a lot of points, but by no means am I a bigger part of this victory. It’s the whole team and the program.”

Minshew came in for Thomas Sirk, who left in the third quarter due to an arm injury. Washington product and senior receiver Jimmy Williams did not play as he is dealing with a back injury.

ECU is idle this coming weekend. It looks to recover from a physical outing before shifting to its Nov. 4 trip to Houston.