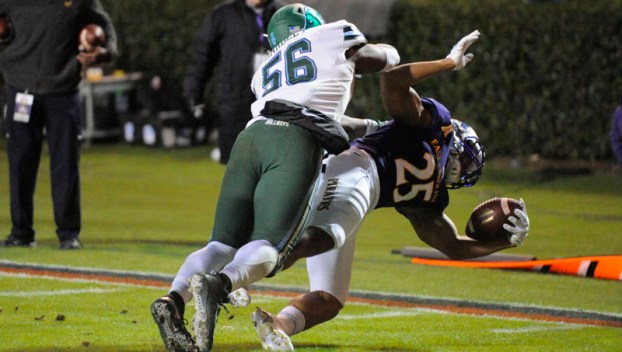 Devin Anderson comes around, looking to tiptoe down the sideline, but is knocked to the ground by a Tulane defender.

GREENVILLE — East Carolina players Hussein Howe, Gardner Minshew and Korrin Wiggins agreed: each loss hurts. Yes, some hurt more than others, but coming oh so close to Tulane only to fall in overtime, 31-24, stings a little more.

There have been a number of signs of ECU’s decline this season. First it was failing to remotely compete with Virginia Tech and West Virginia teams it used to. Now, with the season winding down, the Pirates are struggling to keep pace with the teams that joined the American Athletic Conference at the same time they did in 2014.

That 2014 season was the last time these two teams had met. That game, also ECU’s annual Military Appreciation Day, saw the Pirates control the game for a 34-6 win en route to a 8-5 season.

Each year since has seen the win total decline — five in 2015, three in 2016 and two this season with two games left.

“We didn’t come out here to play close or go to overtime,” head coach Scottie Montgomery said. “We prepare to win. Unfortunately, (Saturday), we did not. … All of them (losses) hurt. Every single one of them hurt like you cannot imagine.”

This most recent loss came down to a handful of moments in which ECU couldn’t execute. The defense couldn’t contain Dontrell Hilliard, who led the Green Wave with 189 yards and two scores. Green Wave quarterback Jonathan Banks added nearly 100 supplemental rushing yards.

Minshew, who quarterbacked the Pirates for almost the entirety of the game, put together an impressive drive to even send the game to overtime. Trailing 24-17, ECU got the ball with one timeout, 2:42 left on the clock and 89 yards to cover.

It was bookended by connections with Deondre Farrier. Washington product Jimmy Williams, despite being used sparingly, made a spectacular 10-yard grab for a fourth-and-5 conversion that gave Farrier the chance to nab a 9-yard touchdown on the next play.

Banks gave Tulane the advantage when he scored from 16 yards out on the fourth play of the overtime.

Hussein Howe, who became the first ECU running back to amass over 100 yards since James Summers did so against Navy last year, picked up 18 yards on two touches to put the Pirates within striking distance of forcing a second overtime.

Just like that, the spotty execution was almost erased from the memories of the few fans left in attendance. The Pirates almost matched their win total from the year before, perhaps even putting them in a position to improve on it in their home finale next week against Cincinnati.

But then Darius Pinnix was stopped a yard shy of the end zone. ECU’s loss — the eighth of the year and fifth in six AAC games — was cemented. The Green Wave, a team that has faced its fair share of problems throughout the season, rolled into Greenville and picked up its first-ever win in Dowdy-Ficklen Stadium.

GREENVILLE — East Carolina is back and ready for the 2017-2018 basketball season. That includes coach Jeff Lebo. He needed... read more