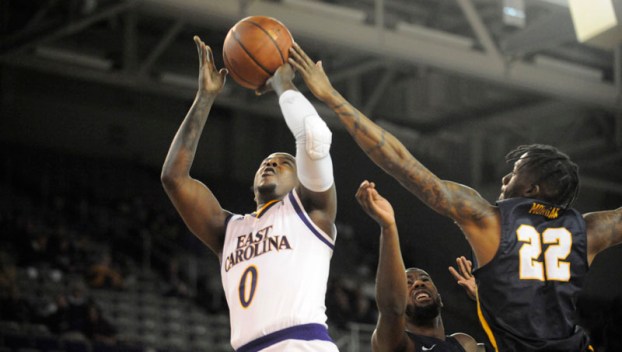 Isaac Fleming drives through contact to get to the basket in the first half of ECU’s season-opening win against Coppin State.

New crop of Pirates introduce themselves in season-opening win

The upperclassmen duo performed well as they combined for 22 points and 10 rebounds as ECU cruised past the Eagles, 76-50. Surrounding them was a group of newer faces fans had never seen in Minges Coliseum.

Freshmen Shawn Williams, K.J. Davis, Dimitri Spasojevic and Justin Whatley all showed something in their collegiate debuts. Williams hit shots early and often. His first two attempts from long range fell, and the rookie Pirate tied Barkley for the game high with 14 points.

“I knew I was going to be comfortable,” Williams said. “I really was just hoping to make my shots because that’s what coach needed me to do. They went down and I’m going to keep shooting.”

Whatley demonstrated a clean, reliable style on the court that has quickly earned the trust of head coach Jeff Lebo. His work on the defensive end helped the Pirates limit Coppin State’s shooters to 24.6 percent from the field.

“I’m very excited about what he’s going to be able to bring to our team,” Lebo said. “He brings a lot of intangible things. He shoots the ball, doesn’t make mistakes, and had a great first game here. … Defensively, he was as smart as anybody on the floor.”

Also making their ECU debuts were transfers Isaac Fleming, Aaron Jackson and Usman Haruma. Fleming’s 28 minutes on the court tied Whatley for the most minutes played by a Pirate on Sunday. He demonstrated his ability to get to the basket. He struggled to finish on his chances inside early on, but bounced back to score a dozen points.

“Once that first one went in, it was just a confidence booster,” Fleming said. He transferred to ECU from Hawaii and sat out last season, per NCAA regulation. “The more and more I do it, the more comfortable I get to knock it down.”

The first basket of the season was a crowd-pleasing fast-break slam by Barkley. Eagle sharpshooter Adam Traore knotted the game at 6-6 almost four minutes in, but Pirates erupted on a 12-2 run to take a lead they’d never give up.

ECU owned a 40-18 lead going into halftime and led by as many as 27 points late in the game. The large margin let former Washington star and Pirate walk on John Whitley get on the floor for the final three minutes. He had a defensive rebound in his time on the court.

ECU will host Radford on Wednesday at 7 p.m. as part of its four-game home stand to begin the season.