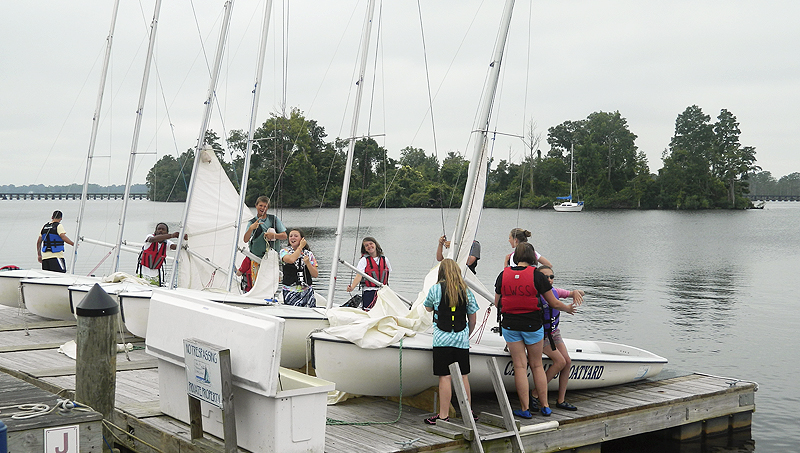 DONE FOR THE DAY: Little Washington Sailing School students and instructors arrange sailboats and stow equipment after an afternoon of sailing lessons on the Pamlico River. The sailing school begins its 10th season in 2018.

One of Washington’s signature waterfront activities will reach a milestone in 2018.

During its Nov. 6 meeting, the City Council learned about that significant occurrence from David Norwood, president and chairman of Little Washington Sailing School. “Next year marks our 10th anniversary, and we want to officially thank the City of Washington for its support over the years,” Norwood told the council. “The sailing program was started to promote water safety and sailing instruction to local youth from the downtown waterfront. … The sailing program was anticipated to increase and enhance activity on the Washington waterfront for both boats and pedestrians, and by its very presence provide a visually attractive scene of white sails, youthful laughter and claps of joy from the spectators.”

Norwood said the sailing school, which began as the Little Washington Sailing Club, has accomplished its original goals and much more. “Washington can boast of having one of the premiere sailing schools on the East Coast. In 2018, we will instruct a hundred and fifty sailors, ages 9 to 18, in water safety, environmental awareness through our … river cleanup program and reading weather conditions,” Norwood said.

Those weekly sessions include classroom instruction and on-the-water, hands-on training on the Pamlico River.

Mayor Mac Hodges, whose property-assessment office on Water Street has a view of the river, said, “It looks good out there. Every day during the summer, I see them (students and sailboats) going by.”

The sailing school uses six 14-foot-long Vanguard 420 sailboats and Optimist Prams, ensuring students are matched with sailboats that are appropriate for them, according to the LWSS website — www.littlewashingtonsailingschool.org — which provides details about the sailing school.