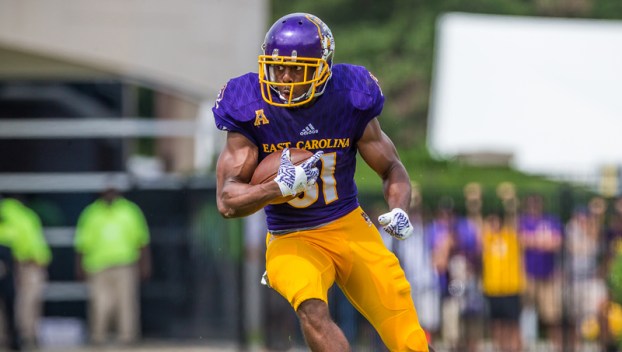 GREENVILLE — Football has been a part of Jimmy Williams’ life for about as long as he can remember. Formerly a playmaking quarterback for Washington, the talented athlete is now a senior receiver just down U.S. Route 264 at East Carolina.

Williams wasn’t sure if his collegiate career would continue this time last year. He treated last year’s senior night — a loss to Navy on Nov. 19, 2016 — as his last game in Dowdy-Ficklen Stadium. He ended up being granted a medical-hardship waiver a month later, allowing him another year with the Pirates.

Having gone through the senior-day festivities once isn’t going to make Saturday any easier for Williams.

“When you know you’re not coming back and this is the last time you get to do something, it’s going to be much different than last year.”

Enjoying the time with his teammates and some light-hearted joking is how Williams plans to combat the anxiety that may accompany his final home game.

Williams only appeared in three games as a freshman before suffering a season-ending foot injury. He’s had to fight through injuries again this season, but that hasn’t stopped him from being a key component for ECU’s offense.

Despite being a captain for the game, Williams was absent for large stretches of ECU’s overtime loss to Tulane this past week. Head coach Scottie Montgomery said Williams was in a lot of pain throughout the game, but spectators couldn’t tell based on the plays he still managed to make.

The most notable was a spectacular 10-yard catch he made on fourth down that set up ECU’s tying touchdown that sent the game into overtime.

“Quay (Johnson) went down and I went in the game. I knew we didn’t have anybody else, so I had to play. On that last drive, I wasn’t coming out,” he said. “I was about dead and I heard Chris Love shouting from the sidelines, ‘Jimmy, do it for Washington.’

“Then, on that fourth-down play, I knew it was zone coverage and I knew Gardner (Minshew) had to go to me on that play. … I got up off the ground and rolled under (the ball) so it wouldn’t hit the ground. It was just a heads-up play by Gardner. That was a great throw.”

Sheer adrenaline and the willpower to do anything to help his team allowed Williams to play through any and all pain. His mother, despite her absence from the stands, also inspired him.

“She had to go to the hospital for a little something,” he said. “She never misses a game no matter what. It meant a lot to me to go out there and, anything that I had, put it out there. I know the type of heart she has. She’s not going to let anything stop her. That’s the mindset I had.”

Williams is one of 27 seniors listed as dressing for their final home game as part of the Pirate program. ECU hosts Cincinnati on Saturday at noon.

CREEDMOOR — After a statement win at West Craven in its regular-season finale to earn a trip to the 2-AA... read more