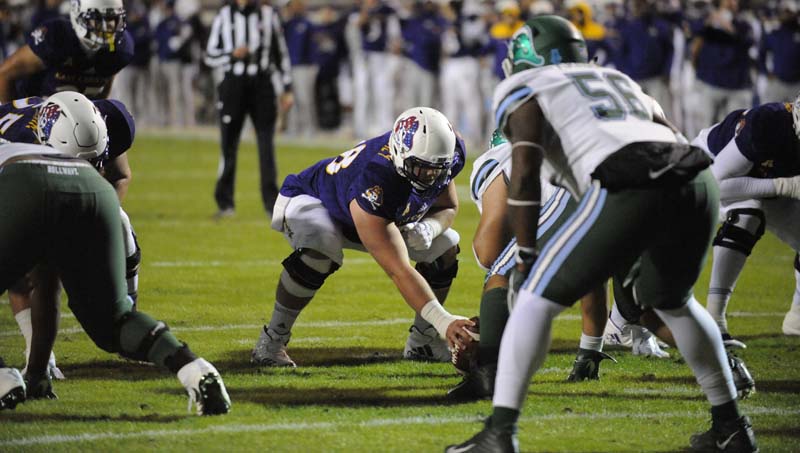 Freshman John Spellacy prepares to snap the ball to Gardner Minshew during ECU’s game against Tulane.

GREENVILLE — East Carolina sent off its seniors with a 48-20 shellacking of Cincinnati. The Pirates, after matching last year’s three-win total, are now looking forward to their season finale at Memphis on Saturday before they set their sights on the future.

Recruiting is a full-time commitment for college coaches. It’s something they focus on even as football is being played. In fact, a number of ECU’s coaches won’t return to Greenville after the Memphis trip. They’ll stay out on the recruiting trail.

Last year marked Scottie Montgomery’s first complete recruiting class. He nabbed some prospects of his own in the month or so between accepting the opening in December 2015 and signing day.

One of the touted acquisitions from the 2017 class was offensive lineman John Spellacy. The coaching staff knew he was a gem. Now, starting at center as a true freshman, the Pirates know Spellacy is the caliber of recruit they need to be targeting.

“He’s the kind of kid we wanted to recruit here,” offensive line coach Geep Wade said. “He’s a tough kid. He works out every morning at 5:30. … He’s what we want from the standpoint of intangibles, toughness and effort. That’s the kind of guys we want here.”

Spellacy also has the pedigree. His father John was an exceptional linebacker for Marshall from 1985-1988 and earned an induction into the Thundering Herd’s hall of fame last year. In fact, the elder Spellacy was teammates with ECU offensive coordinator Tony Petersen.

“The more you’re in football, and the higher up you get, the more those intangibles matter,” Wade said of Spellacy’s upbringing in the sport. “That’s what coach (Scottie Montgomery) wants here.

Spellacy’s comfort level was high coming in. The freshman out of Cleveland, Ohio was a three-year starter for a St. Ignatius team that has 11 state championships to its name. He got to share the field with top-tier recruits like Liam Eichenberg, who currently plays on the Notre Dame offensive line.

“He helped me a lot. I played with him for two seasons,” Spellacy said. “Our line last year might have been one of the best to ever play at Ignatius. … It’s definitely helped me get to where I am now.”

Spellacy and the Wildcats made it as far as the state-championship game his senior year, but fell short in a double-overtime loss. It wasn’t smooth sailing, though. St. Ignatius failed to earn a playoff berth the year before, so while the title loss still stings Spellacy from time to time, he takes pride in helping to put together a dominant senior season.

Spellacy said that is comparable to what he and the Pirate underclassmen are hoping to accomplish at ECU. This year marks the program’s third-straight losing season. He and the rest of the 2017 class, as well as those signing on early next year, hope their legacy can be to right the ship.

And if the Pirates continue to bring in recruits like Spellacy, the turnaround should come sooner rather than later.