Stepping Up: Lebo leaves ECU better than he found it 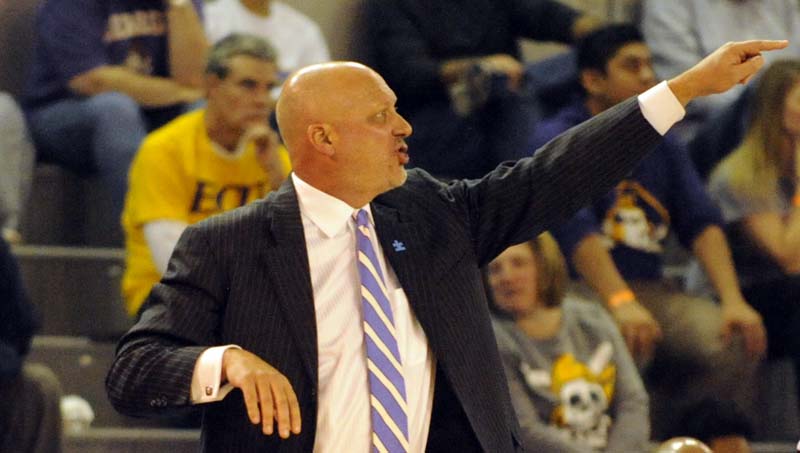 It was announced Wednesday afternoon that East Carolina basketball coach Jeff Lebo had resigned from his position at the helm of the Pirates’ program. The announcement was a surprise to everyone, including athletics director Jeff Compher, who said he didn’t think much of it when Lebo asked for a meeting Wednesday morning.

Fan reactions varied, but the opinion of Lebo had been overwhelmingly negative lately. The Pirates, 2-4 to begin the season, had lost home non-conference games to Central Connecticut State, Radford and, over the weekend, North Carolina A&T.

Perhaps that factored into Lebo’s decision. He said he felt it was time for a leadership change. He also said he wanted to be more involved with his family. They plan to remain in Greenville. Lebo’s son plays basketball for Rose and his parents have moved to the city.

The state of the program has been declining. The Pirates haven’t won more than six American Athletic Conference games since joining the league in 2014. Competing in the AAC has been a focal point for Compher.

It is true that Lebo hasn’t met those expectations in recent seasons. It’s also true that Lebo’s tenure has been the best era of basketball in Greenville.

The Pirates hadn’t had a winning season since 1997 when Lebo took the job in 2010. They went 18-16 his first year. The 2012-13 campaign proved to be the most exciting year in program history — at least since earning an NCAA tournament bid in 1993. ECU won 23 games and captured the CIT championship. No Pirate fan will forget watching Akeem Richmond nail a 3-pointer at the buzzer to beat Weber State in the tournament final.

The CIT championship may have even played a role in ECU being admitted into the AAC as a full member. It joined the conference, then the Big East, as a football-only member in late 2012. The invitation for full-time membership came shortly after the Pirates won the CIT.

There is no arguing that Lebo has left ECU basketball better than he found it. He amassed the most wins in the program’s Division I history. His tenure, lasting over seven years, provided much-needed stability as the entire landscape of college athletics has shifted beneath him.

The Pirates have gone from playing in Conference-USA to an AAC that produced the 2014 national champion Connecticut Huskies. The league also welcomed perennial contender Wichita State this year.

Did ECU need a change in its leadership? If Lebo believes that to be so, then it’s likely. It will be in good hands with interim head coach Michael Perry. He coached the final 14 games last season after Lebo underwent hip surgery. Perry helped the Pirates pick up five AAC wins, including a home victory over UConn, to close out the regular season.

ECU will enter a new era Thursday when it hosts old Colonial Athletic Conference rival UNC-Wilmington. The waters ahead may be murky, but thanks to Lebo, ECU is a much better basketball destination than it was when he first came to Greenville.