Pirates down Seahawks in OT in first game post-Lebo 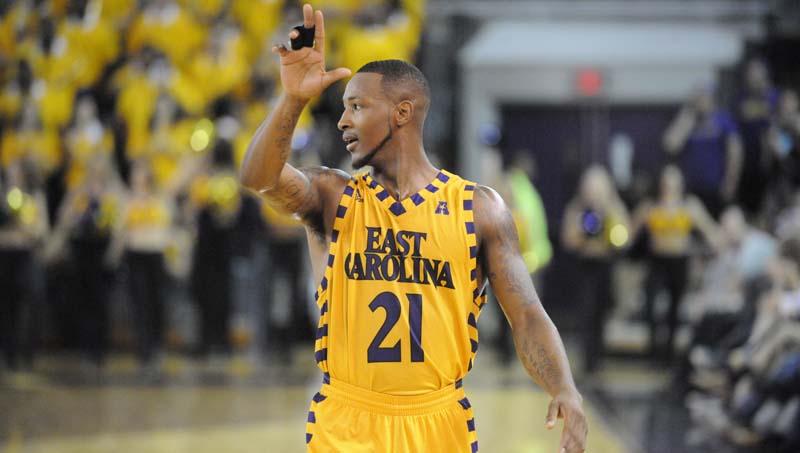 B.J. Tyson celebrates a last-second play just before the Pirates sealed an overtime win against UNC-Wilmington.

GREENVILLE — It was an emotional two days for East Carolina basketball. The Pirates were stunned Wednesday when Jeff Lebo announced his resignation from his role as head coach. Then, on Thursday, they bested in-state rival UNC-Wilmington, 93-88, in overtime for their first win since rallying to beat Cleveland State on Nov. 20.

The rollercoaster served as motivation for senior guard B.J. Tyson and his teammates. Tyson scored a career-high 30 points in the win.

“I told (assistant) coach (Kyle Robinson) before this that I was going to be playing this game for coach Lebo,” Tyson said. “I want him to know that. This game right here was dedicated to him. I’m sure that the guys feel the same way.

“I told one of the players that I’m going to be playing with anger. That’s what I did. I came out here and played with my anger. I think I left it out on the court.”

The Pirates kept the visiting Seahawks at arm’s length for the majority of the second half. They never led by more than seven, but clung to the advantage until Jay Estime’s 3-pointer gave UNCW a 70-69 edge with 5:27 left in regulation.

Tyson called his own number in the last minute. He squared up his defender, watching as the shot clock wound down, then drove the lane for a layup that gave ECU a 78-75 lead with 46 seconds left. Devontae Cacok, who netted a game-best 35 points, reclaimed the lead for Wilmington, but a free throw from Tyson was enough to send the game to overtime.

“I think they wanted a good send off for (Lebo),” interim coach Michael Perry said. “I can’t say enough about him. I told him yesterday that I’m a better basketball coach having coached with him.”

Once the game reached its extra period, Isaac Fleming sunk consecutive layups to give ECU a lead it wouldn’t let go of. Fleming had 21 points in the game.

The Seahawks jumped out to an 8-0 lead thanks to a surge bookended by Jaylen Fornes triples. They led by as much as 10 less than five minutes into the game. ECU was able to whittle away at the deficit as Fleming notched seven unanswered points. He and Tyson scored 20 of the team’s first 21 points.

Kentrell Barkley turned a steal at one end into a one-handed dunk at the other to tie the game at 26-26. Dimitri Spasojevic’s short hook then gave ECU its first lead of the game. The freshman from Serbia had 10 points.

“We wanted to play fast. We really wanted to get out in transition,” Perry said. “We didn’t want to run a lot of plays. … Play fast, think fast — that’s how we wanted to play.”

The Pirates ended the first half on an 8-2 spurt to take a 48-42 lead into the intermission.

ECU’s whirlwind of a week doesn’t slow down. It now faces a quick turnaround when it hosts Delaware State on Saturday at 2 p.m.