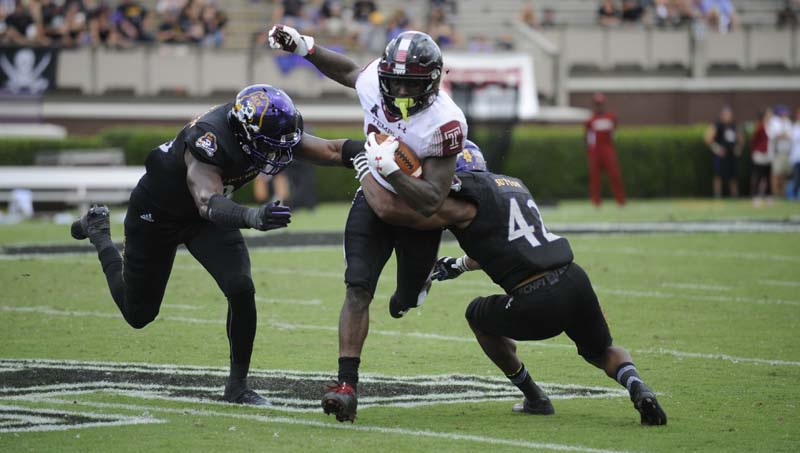 A Temple player nearly splits a pair of Pirate linebackers during a game this past season.

GREENVILLE — A change needed to be made on East Carolina’s defense. The unit was gashed time and again en route to a second-straight 3-9 season for the Pirates.

A change was made this week when head coach Scottie Montgomery hired David Blackwell as the program’s new defensive coordinator. Blackwell, a former Pirate and a 20-year coach, is excited that his coaching journey has finally brought him back to Greenville.

“This is a very special place for me. This is where I went to school and played football,” Blackwell said. “I remember walking off the field when we beat Stanford (in the 1995 Liberty Bowl) and flying back here and saying this is it.

“I remember talking to Matt Maloney, ‘Big Guy,’ and saying, ‘I will be back.’”

Added Montgomery: “Him being a Pirate — and Greenville and our fan base — helped us ink the deal. That was a very, very important deal. I wanted someone that was established and whose system was established.”

As for his system, Blackwell first mentioned defensive aggressiveness. He said he’s learned over the course of his career the need to adapt to players’ talents, but that aggressiveness has been a constant.

“We’re going to give you multiple fronts and multiple coverages,” he said. “Everything starts — what coach (Montgomery) and I talked about — is you can’t be married to a scheme as a coordinator and as a coach.

Montgomery and his staff implemented a 4-2-5 defensive scheme this past season. ECU has been recruiting players to fit that system. The Pirate coach said they’re not necessarily scrapping that formula, but that bringing in Blackwell was an opportunity for a fresh start on that side of the ball.

Arguably ECU’s most notable shortcoming was its inability to contain explosive plays. The Pirate defense gave up 10 plays of 70 or more yards in 12 games this past season. Blackwell said he hasn’t reviewed much game footage yet, but has kept up with his alma mater.

He knew right off the bat that containing those kinds of plays has to be one of the defense’s primary objectives. It’s an area in which his Jacksonville State defense excelled.

“We’re going to be sound in what we do and try to limit explosive plays,” Blackwell said. “This past season, at the end of the regular season, (Jacksonville State) had given up two runs of more than 20 yards all year.”

The hire came shortly after Robert Prunty was named Hampton’s next head football coach. Prunty took over as interim defensive coordinator once Kenwick Thompson was reassigned during the season.

However, it was a move Montgomery had been planning to make regardless.

Blackwell, who officially started on Friday, hit the ground running. Montgomery said that the two went from the 10:30 a.m. introductory press conference into a multiple-hour trip to visit recruits.