A look at foes-turned-friends in ECU recruiting class 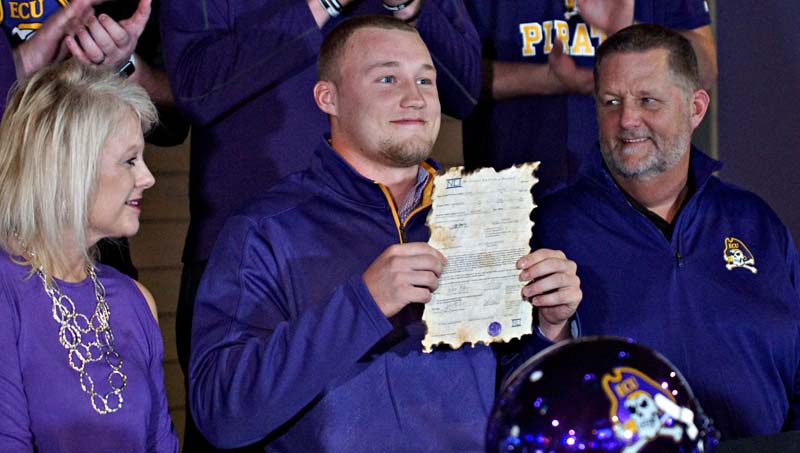 GREENVILLE — East Carolina announced last week its 19 early signees for the 2018 recruiting class. The first batch of high-school recruits to sign on with the Pirates — which should be most of this year’s class — addresses a number of areas third-year head coach Scottie Montgomery prioritized.

Sticking with what has been his plan since arriving in late 2015, Montgomery made it a point to improve team speed with the prospects he brought in.

“We’ve got some really, really fast skill guys coming in, as well. Every position group has added a tremendous amount of athleticism and speed.”

Montgomery was able to stay in the state of North Carolina to recruit a number of these athletes. Thirteen of the 19 that inked national letters of intent last week were from the area.

“We’ve done a great job in the state of evaluating,” he said. “We’ve started to become a little bit more strategic in the state in the way we offer, how we offer and how we go about our business just because of the great players we have here.”

Here’s a look at three soon-to-be Pirates that Washington football fans have seen in the past.

As a sophomore, Ahlers ran for 134 yards and two touchdowns against the Pam Pack. He completed 3-of-10 passes for another 69 yards and a score, but it wasn’t enough to upend the Pam Pack.

Behind a 297-yard performance from Clinton Pope, Washington was able to scoot past the Vikings, 35-34. Its defense shut out the hosts in the first half. Then the Pam Pack was able to hold on as Conley rallied in the second half.

The two years since haven’t been as kind to Washington. As Ahlers’ arm improved, so too did his team’s dominance over the Pam Pack. He threw for 202 yards and a pair of touchdowns and ran in two more as Conley pounded Washington, 62-20, this past season.

“He’s a guy that we tried to get committed for a long time,” Montgomery said. “We’re really proud to be able to announce Holton Ahlers as our quarterback commitment and signee in this class. Coach (Nate) Connor has done a really good job at D.H. Conley of coaching him up. He’s gotten better and better every year.”

Washington ran into ECU’s newest defensive back a few times over the past few seasons. The Pam Pack didn’t have Havelock on the schedule this season, so it didn’t see Barrett during his senior campaign, but he did leave his mark during his sophomore and junior years.

As a sophomore, Barrett had two tackles in a 50-13 win over Washington. However, he made most of his impact on the offensive side of the ball. He had three catches for 51 yards and a touchdown in that game.

He improved on that showing the following year. Barrett hauled in two passes for 52 yards and a touchdown. The junior also aided the defense in a 38-0 shutout at Washington.

“Unbelievable player,” Montgomery said. “You’re talking about speed at running back and linebacker, where we’re going to play him on the defensive side. … I liked him the whole season.”

The Washington faithful may not remember much about Jireh Wilson. The only time he and Northside-Jacksonville clashed with the Pam Pack was in the first round of the 2015 playoffs.

Washington, coming off a narrow loss in the state championship the year before, was hopeful. It had won five of its last six heading into the postseason. It earned the No. 8 seed, barely clinching a home game in the opening round.

It all came crashing down when the No. 9 Monarchs blanked the Pam Pack, 34-0, to dash their dreams of a return trip to the title game. Wilson, a sophomore on that team, was tasked with helping Northside-Jacksonville’s front slow the likes of Clinton Pope and Jarquez Keyes.

Wilson did just that. As a senior, the two-way threat proved to have the best hands of his fellow Monarchs. Offensively, he led the team with 649 yards receiving and 11 touchdowns. His four interceptions also led the team.

“I really liked Jireh’s skillset and his size,” Montgomery said. “He’s going to be a guy we play on the defensive side of the ball. A really, really good skillset catching the ball. The more guys that you can get on defense that played offense and defense, that really helps your football team.”