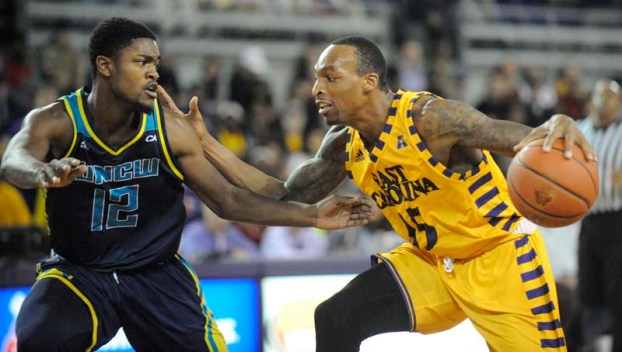 Kentrell Barkley attempts to drive to the basket against UNC-Wilmington.

GREENVILLE — December is a tough month for college-basketball players to navigate. There’s a sort of cadence most seem to benefit from. The Pirates, for example, had grown accustomed to playing two or three times a week during their non-conference slate.

Then exams rolled around, and ECU didn’t play a game for two weeks. The Dec. 18 return to action was spoiled by in-state foe Charlotte, which dealt the Pirates a 69-50 loss at home. They got back on track in a 76-68 win over Grambling State in their final tune up before making their foray into American Athletic Conference competition.

But then there was another break. Many left Greenville, returning home to spend time with family and friends for Christmas before Thursday’s league opener at Tulsa.

“I went back home to Durham and spent time with my family. I got a new watch for Christmas, so that’s what I was thankful for,” junior Kentrell Barkley said. 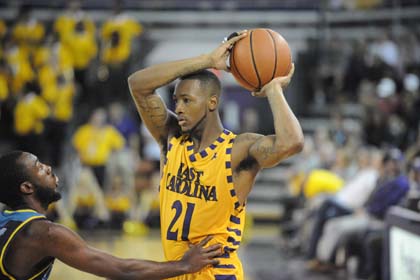 B.J. Tyson is checked by a UNC-Wilmington defender.

Senior B.J. Tyson added: “It was very nice. My mom was happy that everybody was home. I got the chance to go see a lot of family members. The most important thing was spending that time with parents, brothers and sisters.”

The Pirates are going to have their hands full when they take on the Golden Hurricane. They know that the AAC is loaded with stellar forwards. After having 7-foot Andre Washington last year, this looks like another season in which ECU will struggle in the paint.

“He’s one of the best players in our league; an inside-outside forward,” interim coach Michael Perry said. “He can shoot 3s, he can post up, he can drive it. He’s a matchup problem for a lot of teams.”

ECU may very well be one of those teams. Forwards Jabari Craig and Dimitri Spasojevic have come on strong as the season has progressed. Defensively, they’ll have to rise to the occasion to keep things even in the paint.

“It’s hard to duplicate that kind of size and talent you’re going to see in conference play,” Perry said of preparing for Tulsa. “Preparation and coaching are going to be at a very high level. We’ve got to match that in ever area, so we’re going to have to be very detailed.”

They know that the AAC will bring stiff competition each time they hit the floor. They also know what Thursday’s showing could mean for the confidence of a young team.

“We’ve got to execute. We’ve got to fight because this league is very tough,” Tyson said. “I’ve got to be that guy to show that toughness, that anger and that fight.

“It starts with the starters. The guys that start off the game, we’ve got to start off right. We can’t start slow. With the young guys, once they see that, they get comfortable.”

The game is set to tipoff at 5 p.m. from Tulsa. ECU will play its first home conference game when it hosts Central Florida on Sunday at 5 p.m.

A look at foes-turned-friends in ECU recruiting class