Pirates not built to compete in AAC 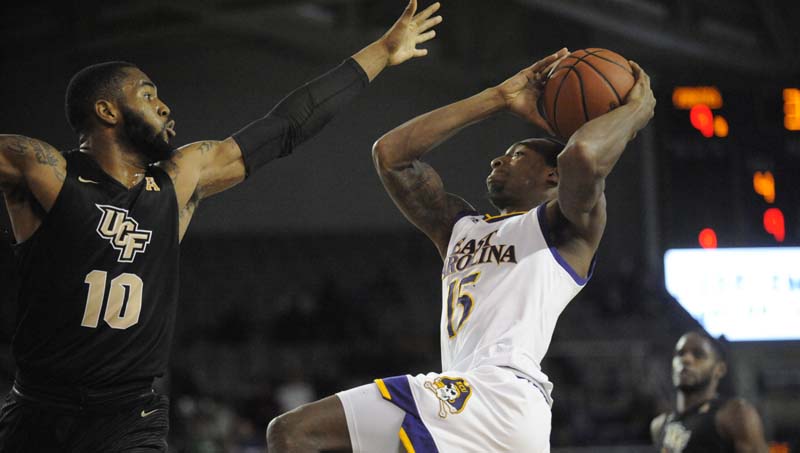 Kentrell Barkley fades back for a shot after driving the lane.

GREENVILLE — Upperclassmen B.J. Tyson and Kentrell Barkley have helped keep East Carolina’s basketball season afloat as much as possible. Tyson, a senior, notched his first career double-double in a loss at Tulsa in the team’s American Athletic Conference opener.

The two combined for 21 points Saturday against Central Florida, but ECU proved that, top to bottom, it’s simply not built to compete in the AAC. The Knights did just enough, and ECU gave them opportunities to do more in a 59-39 loss at home.

“Now that we’re stepping into conference play and it’s a higher level, certainly athleticism is on another level than what it was earlier,” interim coach Michael Perry said. “We’re finding out that you can’t be down to teams like this and make a run and come back like we did against some other teams.”

Offensively, the Pirates had their worst first-half output of the season. They didn’t crack double digits until a layup by Barkley more than 16 minutes into the game. Even so, it was still within reach, 27-18, at the break.

The Pirates were turning the ball over before the struggling shooters even had a chance to get one off. They finished with 21 giveaways — seven of which came from starting point guard Isaac Fleming.

The game quickly slipped away in the second. Caesar DeJesus knocked down an early 3-pointer. Shortly after, the freshman guard had a steal that turned into a trey for teammate Djordije Mumin. A layup by Tacko Fall capped off a 16-0 run by UCF that pushed its lead to 43-20 with 13:53 left in the game.

“Coming out for the second half, the emphasis was putting two half together,” Perry said. “We liked the defensive field-goal percentage. We wanted to try to limit our turnovers. … We wanted to take care of the basketball and put two halves together.

“We didn’t get off to a good start. Shots didn’t fall and we had a couple of turnovers. … We made a good run at them. Again, trying to build momentum when you don’t have offensive productivity is difficult.”

The Pirates carried their load on defense in holding UCF’s shooters to 39.6 percent from the field. Offensively, though, they lacked any sort of identity. Senior forward Jabari Craig played eight minutes. Usman Haruna helped pick up the slack, but ECU’s bigs couldn’t take advantage when Fall wasn’t on the floor.

Walk-on Justice Obasohan shattered his career total with 21 minutes on the floor. The 6-foot-5 junior was a bright spot on defense as he hauled in five rebounds and blocked four shots.

It’s tough to look at the upcoming schedule and see a game in which ECU could pick up its first AAC win. It will travel to South Florida and UConn next week before returning home to host top-10 Wichita State on Jan. 11.