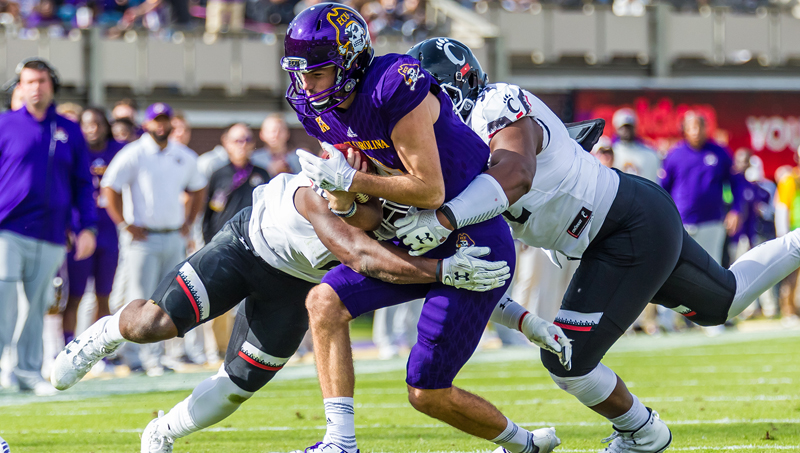 ECU announced Jan. 30 that incumbent starter Gardner Minshew withdrew from the program to “devote his full attention to a family matter.” As a junior, Minshew appeared in 10 games and led the Pirates with 2,140 passing yards and 16 touchdowns.

Sophomore Reid Herring got on the field twice last year. He completed just one pass, which was a 20-yard touchdown to now-senior Trevon Brown. However, head coach Scottie Montgomery and his staff intend on evaluating each signal caller.

Greenville product Holton Ahlers enters the program with a lot of excitement. The 6-foot-3, 228-pound freshman has dazzled Pirate territory during his four years at D.H. Conley. Also contending for the job will be redshirt freshman Kingsley Ifedi. He finished his prep career as one of the most prolific passers in the Charlotte area.

“All three of our quarterbacks went in the first group,” Montgomery said after Monday’s practice. “I’m really, really excited about the style of quarterbacks we’re playing with right now.”

There are similarities between the three quarterbacks. From a physical standpoint, however, each is vastly different. All three stand at 6-foot-3, according to ECU’s official roster. Herring is the smallest at 180 pounds. He’s not as mobile as Ifedi or Ahlers, but brings accuracy as a pocket passer. He completed 26-of-38 passes for 312 yards in scrimmages last spring.

Ifedi and Ahlers established themselves as dual threats in high school, but their running styles are slightly different. Ahlers has 14 pounds on Ifedi, which lends to being more powerful on the ground.

The same is true from a personality standpoint. Herring, despite only being a sophomore, has taken on a leadership role amongst the quarterbacks. Montgomery said Herring’s competitive demeanor has been that of someone ready to take the reins of the offense.

“Reid has always been a really good player; really polished. I think the one thing with Reid, if you ask him right now, he’s glad the blanket has been taken off,” Montgomery said. “He’s felt like he should be the guy for a long time now. … The one thing we really like is his command of the team and the group he’s in.”

ECU’s receiver corps is going to shoulder added pressure this season. The Pirates haven’t had a bona fide starter since Shane Carden in the 2014-15 season.

“It’s a blessing to be out here with the boys. I’ve been here for a long time,” senior receiver Trevon Brown said. “It’s fun. Every time I step out here, it’s fun. … It’s tough going from quarterback to quarterback, but the guys we’ve got here, I believe in them and they believe in me. We’re going to make the most of it.

“It’s more on us (receivers) than them (quarterbacks). We rally around them and pick them up even if they throw a bad ball.”

This will be the topic to follow as the spring progresses. Herring has been in the program the longest, but the three only have one in-game pass between them. With that and the offensive changes Montgomery said will be made, this race is wide open.