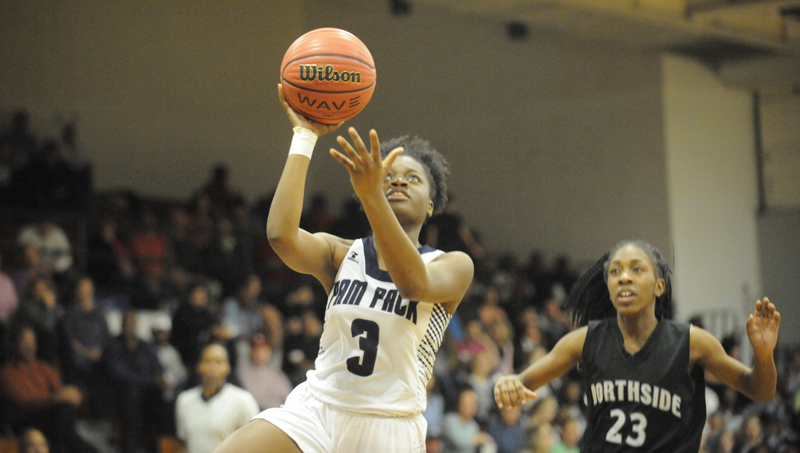 Cyntavea Blackledge drives down the floor for a layup in an early-season game against Northside.

Beaufort County has no shortage of female talent on the basketball court. Washington, Northside and Southside all earned their way into the playoffs. The Lady Pack will host its first-round matchup while the others will hit the road.

Each team has a mixture of senior leadership and young guns. Washington is led by the chemistry twins Cierra and Tierra Wiggins have with the rest of the team. Southside has seniors Symone Ruffin and Michaela Dixon to take over games and make the players around them better.

The Lady Panthers have upperclassmen studs in Abby Mooring and Brooklyn Hudnell, among others, but have also leaned plenty of underclassmen like Ke’Shayla Arthur and Prentiss Thomas.

Then there’s Northside’s boys. The Panthers have no shortage of 3-point shooting and a plethora of capable forwards that form a well-rounded team.

No matter the squad, all of Beaufort County’s playoff-bound teams will rely heavily on the stars that have led them this far. Here are those that excelled in conference tournaments last week.

Cyntavea Blackledge had been a starter most of the season. Coach Ralph Biggs shook up the lineup, though, and the junior guard has since been the Lady Pack’s first off the bench.

Blackledge’s contributions off the bench have been as important to Washington’s recent success as anything. She scored 21 points in a win over South Lenoir last Wednesday. That earned the Lady Pack the chance to play Kinston for the 2-A Eastern Plains Conference championship. Blackledge scored 22 in a shortcoming that shows Washington is ready to compete with about anybody.

Symone Ruffin and Southside ran into a seemingly unstoppable Pamlico County squad in the 1-A Coastal Plains Conference tournament. The Lady Hurricanes made it a point to contain Symone Ruffin, but she still managed eight points in the loss to one of the best 1-A teams in the east.

The Lady Seahawk senior was a force to be reckoned with in a win over Tarboro earlier in the week. She poured in 21 points, five rebounds, four steals and an assist. She’s playing well heading into the playoffs, which means the Lady Seahawks are playing well.

The top of the 1-A Coastal Plains Conference has been a struggle between Northside and Pamlico County, which meant Friday’s championship meeting between the two was an anticipated one.

The Panthers fell short, 60-46, after turning the ball over 13 times and going 8-of-17 at the free-throw line. Sophomore guard Rashod Smith led the way with 14 points. He’s the engine that makes this offense go, and he rarely lets Northside struggle in back-to-back games.

Abby Mooring gave Northside an early spark in a 42-28 win over Jones Senior in the 1-A Coastal Plains Conference tournament, but was unavailable in the second-round loss to Riverside.

The senior Lady Panther got the jump on their visitors as she handled most of the scoring in a 12-point first quarter. She added five more points — a make from midrange off of a pass from Akleelah Moore and a fourth-quarter trey — and helped create opportunities for others. She’s set to return for Northside’s first-round trip to Perquimans.