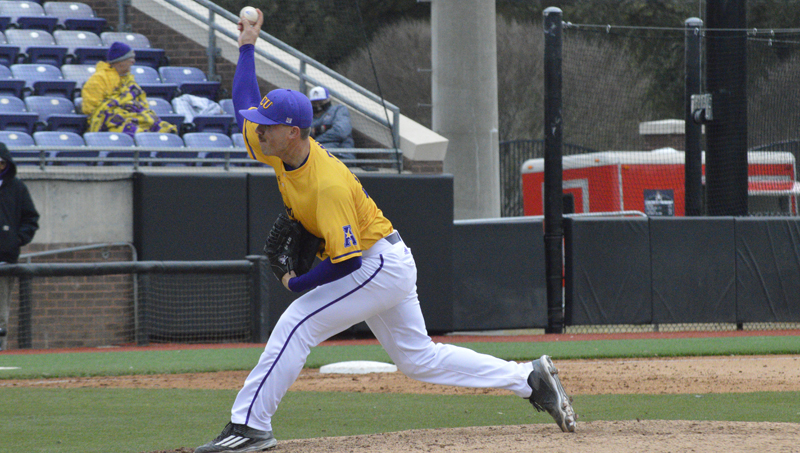 : Sam Lanier throws to a batter last season. Lanier is one of many ECU bullpen pitchers to have dominated early on. (Michael Prunka | Daily News)

GREENVILLE — East Carolina hosts North Carolina Friday for the beginning of the first weekend series between the in-state rivals. The two clubs have met in numerous midweek contests over the years, but never in a three-game weekend set.

The second game will take place Saturday in Durham, then the series wraps up Sunday in Chapel Hill.

Head coach Cliff Godwin said he knows these games aren’t like others the Pirates will play this season, but wants to try to treat them like business as usual.

The players can appreciate the significance of this weekend. That’s especially true of those that grew up around ECU. There are three Greenville natives on the roster that have seen plenty of the UNC-ECU rivalry before ever donning the purple and gold.

Sophomore and fellow Conley alumnus Bryant Packard added: “It’s a big deal. I grew up here coming here in fifth grade coming to the Carolina games excited. When I was in high school, I would come here and watch the Carolina games. … It’s really something you want to be a part of.”

In fact, Packard is looking forward to each venue this weekend. He was part of a 9-4 win over Duke in Durham last season. He said the Pirate fans outnumbered the Blue Devil faithful. Then, for Sunday, he had been recruited by UNC and played on that field during his travel-ball career.

“Just knowing they’re out there supporting us is big,” Packard said of the fans.

There’s a lot to gain. ECU, 4-0 to start the season, will take on a Tar Heel club ranked sixth after the season’s first weekend. The Tar Heels took 2-of-3 against the American Athletic Conference’s South Florida.

The Pirates will likely see UNC’s best pitchers over the course of the series. It will be an early-season test for a lineup that has six batters hitting above a .300 clip and has led ECU to four wins by five or more runs.

“We’re very confident. We’ve been rolling the past four games,” said sophomore Packard. He’s sporting a .308 batting average with four RBI early on. “What I like about this year is that we have a lot of options. Anyone can go in at anytime. If somebody isn’t having a good game, you can have someone to rely on. We’ve got a lot of depth this year.”

Gianluca Dalatri took the ball for the Tar Heels’ season opener. He took the loss in a 4-3 shortcoming after being tagged for three runs (all earned) on six hits in 3 2/3 innings of work.

Tyler Baum and Brett Daniels fared better on Saturday and Sunday, respectively. Baum rolled through 5 1/3 innings, conceding two runs (both earned) on four hits and a walk. He fanned 10 batters. Daniels lasted four innings to start Sunday. He pitched to contact as he gave up seven hits, but only one run in four frames.

Defensively, ECU will rely on a bullpen that has been nearly perfect through four games. Matt Bridges, Kirkpatrick, Gavin Williams and Sam Lanier have all made multiple relief appearances so far.

None of them has given up a run.

“I just think we have a good mindset that coach (Dan) Roszel installs in us. I think we just want to go out there and pump up the zone,” Kirkpatrick said. “We just do what we can for the team.

“Everybody is excited when you come off the field. Everybody is high fiving, saying, ‘Great job, keep doing your thing.’ Everybody is pulling for one another. It’s part of our culture we have here.”