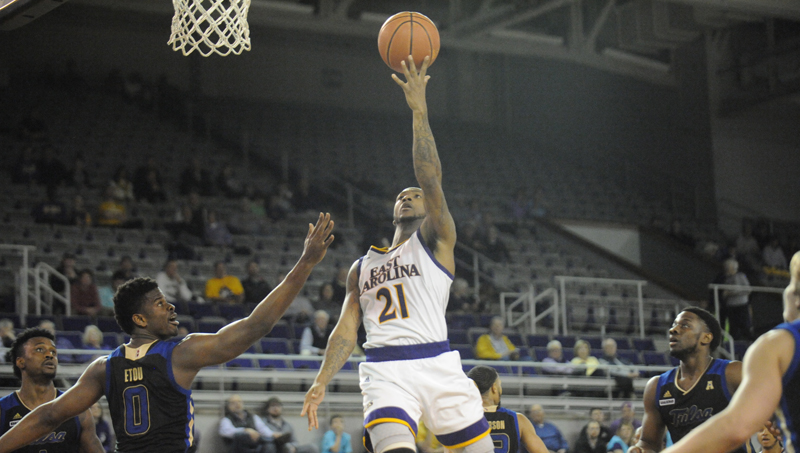 GREENVILLE — B.J. Tyson’s time playing in Minges Coliseum didn’t come to the close that East Carolina had hoped for. The Pirate offense mustered just 19 points in the second half of a 72-58 loss to Tulsa on senior night Thursday.

Tyson, a four-year leader of the embattled ECU team, said the emotions began to hit him on Tuesday. He had seen seniors experience the same during his tenure with the Pirates: Paris Roberts-Campbell his freshman year, Michael Zangari his sophomore year, and Caleb White last year.

This time around, it was Tyson’s turn for a curtain call.

“I gave it my all here for my whole career,” he said. “It hit me Tuesday night when I was laying in bed just thinking. I did a lot here. I’m thankful. I’m grateful. … One man that’s not here is coach Lebo. I love him to death. He gave me an opportunity.”

Tyson’s legacy will continue on, even as ECU looks to move in a new direction after Jeff Lebo stepped aside early in the season. It’s a legacy that goes beyond the court. Tyson has been a model student-athlete.

“I can’t say enough about him, and not just because of his ability on the floor,” interim head coach Michael Perry said. “As good a player as he’s been on the floor, he’s been better off the floor. He’s done a great job for us in terms of being an ambassador.”

Last year, Tyson was one of two players to make the trek to John Cotton Tayloe Elementary School. He spoke to the children about basketball, life, and more. Tyson also got to show off when he lined up a handful of the kids and proceeded to dunk over all of them.

“I love the kids. Where I’m from, we don’t have the type of guys that’ll come back and do that to us,” Tyson said. “My mom built it in me that, whenever you get the opportunity, to put smiles on kids faces. … Whenever I’m around kids, I just think about them.”

Tulsa was in the driver’s seat throughout most of the first half of Thursday’s game. A Martins Igbanu 3-pointer pushed the Golden Hurricane’s lead to a dozen with 6:33 left before intermission.

Then freshman guard Shawn Williams took over. He completed a four-point play and followed that with back-to-back treys shortly after, quickly closing ECU’s deficit to one, 36-35 with 2:42 left in the half.

Then the wheels came off. Williams scored 14 points in the first half, but was held scoreless in the second. Some shots simply weren’t falling, but Tulsa also made it a point to keep him in check.

It took the Pirates nearly four minutes before an Isaac Fleming layup gave them their first points of the half. Then they went another five minutes without putting another point on the board.

Tulsa led by as many as 14 points with less than a minute left. Tyson had 11 in the second half en route to a game-high 18, but it wasn’t nearly enough to rally.

ECU concludes the season at Memphis on Sunday. The Pirates then set their sights on the American Athletic Conference, which begins Thursday in Orlando.