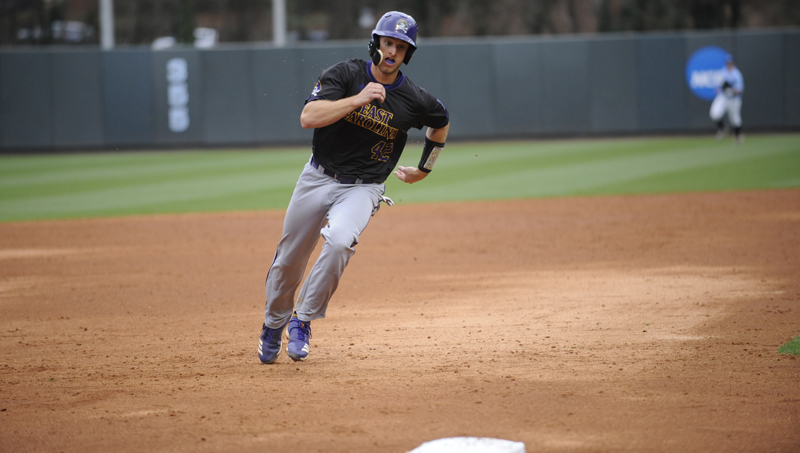 Spencer Brickhouse darts for third base at UNC two weekends ago.

Holba picked up his third win in as many outings. He hasn’t allowed a run in the almost 19 innings he’s thrown to begin the season. In that span, the junior has 24 strikeouts to just two walks.

“We came out with a lot of energy and had some quality at-bats throughout the lineup. Chris Holba was outstanding today and when he is on the mound it takes the pressure off the offense,” coach Cliff Godwin said. “He puts up zeroes and then we score runs and he comes right back out with more zeroes, it allows the team to gain some momentum.”

ECU stumbled at the start of its annual invitational. The Pirates began the weekend with Pepperdine on Friday. The Waves blew open a 4-2 lead with eight runs in the top of the ninth to seal a 12-2 win over the hosts.

Junior southpaw Austin Covers began the frame on the mound, but ECU ended up using five arms just to get out of the inning. Willy Strong finally closed it out. After the Waves collected two of their three hits in the stanza, Strong caught a batter looking and induced a groundout to shortstop.

The Pirates couldn’t bounce back Saturday against Missouri State. The Bears had Drew Millas go 4-for-4 at the plate, and three others collected multiple hits en route to a 7-4 win.

Starter Jake Agnos continued to struggle. He was tagged for three runs (all earned) on four hits and three walks in just 2 1/3 innings of work.

After conceding a pair of runs in the top of the second, Jake Washer got ECU on the board after leading off the bottom of the inning with a single through the right side. The Bears had an answer for everything the Pirate offense could muster, though. Spencer Brickhouse and Alec Burleson each batted in runs in the bottom of the sixth to pull within one, 4-3, but Missouri State came right back to score twice in the top of the seventh.

“We just didn’t play well in all phases, and Missouri State did,” Godwin said. “Coach (Keith) LeClair used to say the season is a marathon, not a sprint.”

ECU will host College of Charleston for a two-game midweek set before heading out to Charlotte this weekend.