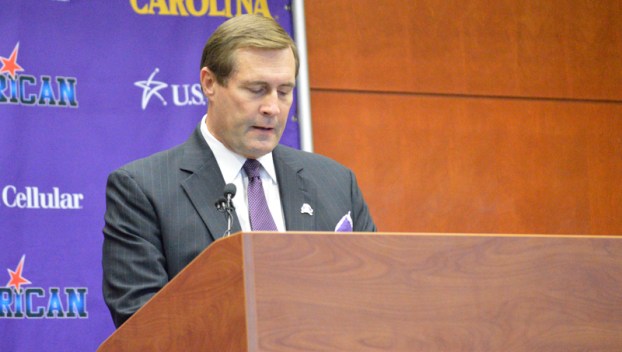 Jeff Compher takes the podium during a press conference.

Compher out as ECU AD

GREENVILLE — After weeks of speculation, the East Carolina University Board of Trustees Friday morning approved the departure of director of athletics Jeff Compher. He will step down on May 1, according to a news release from the university.

Compher “is eligible to be paid over five years ending April 30, 2023 up to a total of $1,262,500,” according to the release. “The payments, if made in full, equate to 50 percent of the base salary and 50 percent of the supplemental pay he would have earned if his employment had continued through the contract term.”

Compher had received a five-year contract extension in June 2017.

The buyout agreement saves ECU almost $1 million should Compher have been terminated without cause. It also requires that Compher make “reasonable efforts to obtain a new position in an athletic-related position.”

There is also a provision stating that, “while the university is unaware of any violations of law or policy, it has retained the right to stop ongoing payments if it learns that Compher committed Level I or II NCAA violations or his coaches did so with his knowledge.”

The news comes in the midst of ECU’s search for its next basketball coach. The Pirates’ season came to an end Thursday in the first round of the American Athletic Conference. Former head coach Jeff Lebo stepped down early in his eighth season, and Michael Perry has been navigating the program on an interim basis since.

It also comes in the wake of back-to-back 3-9 football seasons under head coach Scottie Montgomery, who Compher hired following Ruffin McNeill’s dismissal after the posting a 5-7 record in the 2015 campaign.

Compher led the athletics department as it transitioned into the AAC in the 2014-15 academic year. He was also responsible for bringing in Cliff Godwin, who is the fourth-year coach of the 19th-ranked Pirates. He also helped oversee the renovation projects currently taking place in Dowdy-Ficklen Stadium.

“I want to thank Jeff Compher for his service to ECU and pirate Nation over the past five years. Jeff has worked hard and accomplished much in his time here, and our athletics department and student-athletes are far better off as a result of Jeff’s efforts,” ECU Chancellor Cecil P. Staton said in a release.

Staton also said a search for a new AD “will begin immediately, and interim leadership will be announced soon.”

No. 19 Pirates take trip to Charlotte

CHARLOTTE — No. 19 East Carolina bounced back from a one-win outing in the Keith LeClair Classic in a 5-2... read more