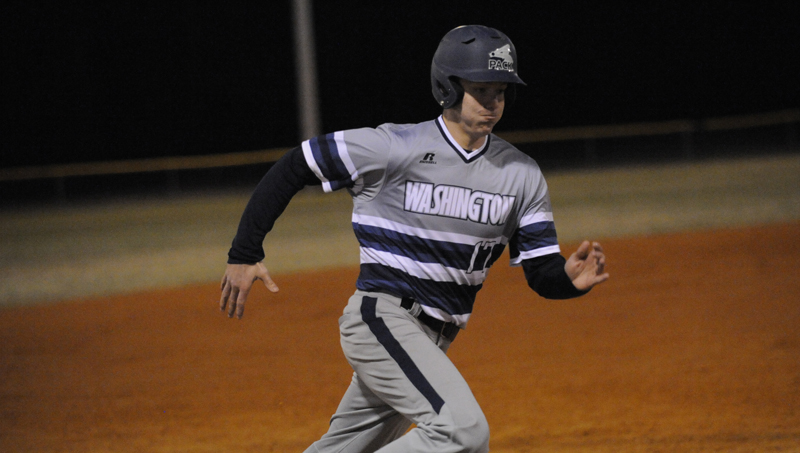 Hunter Hall rounds third base in Washington’s win at Northside on Friday.

Washington and Northside have the same record after their meeting in Pinetown on Friday. However, the two Beaufort County clubs have different mindsets as they prepare for Tuesday’s conference openers.

The Pam Pack began the season with two one-run games: a 3-2 win at Riverside, and a 2-1 shortcoming to a 4-A foe in South Central. Then, in a final tune up before heading to Greene Central on Tuesday, Washington pounded its local rival, 14-0.

Washington, after missing those timely hits in the first two games, hopes it began a trend on Friday. It may take some time for batters to settle in on Tuesday due to the cold and rain limiting practices, but coach Kevin Leggett knows that the team’s defense and pitching make it so they don’t need double-digit hits each time out.

“You don’t need 10 hits a game if you get walks and one good, big hit,” Leggett said. “That’s all we need to do going into conference. We’ve got pitching and defense. A lot of teams shouldn’t score a lot of runs off of us. If we get runs when we have the chance, that’s going to be a big thing.”

The Pam Pack goes into this two game week — at Greene Central on Tuesday and home against North Lenoir on Friday — with its entire pitching staff available. It’s in good position to start on the right foot after the lopsided win at Northside last week.

The Panthers, on the other hand, hope to just put Friday’s loss behind them. It was their first of the season after opening with an 11-0 win against Columbia, and a 3-2 victory over former 1-A Coastal Plains rival Bear Grass.

“Baseball is a long campaign,” Northside coach Keith Boyd said. “You’re going to go out there and go through stretches where you look like world beaters, and then you’re going to have a hiccup. It happens at every level. … The thing you can’t do is sit there and dwell on one outing.”

Boyd has nine seniors on his roster. He isn’t too concerned with whether or not his club will bounce back. Instead of harping on Friday’s loss, he hopes the Panthers will focus more on the good takeaways from the other two games.

“We had a heck of a win Thursday night,” Boyd said of the win over the Bears. “It was emotional. Everyone was glued in. … The seniors, they’ll be fine. I’m not worried about this group. We just had a bad night.”

Northside can’t afford to stumble out of the gate Tuesday at Riverside. The Knights battled Washington until the final out.

Friday’s game was about as tough on the Lady Panthers. Washington struck early and often en route to an 8-1 win in Pinetown.

Northside isn’t worried about being 1-3 heading into Tuesday’s trip to Riverside. The Lady Panthers made a point of seeing some of the best competition around. They showed improvement in their home-and-home with South Central. After falling 12-1 on their own turf in their season opener, they turned around and were more competitive in a 5-3 loss in Winterville.

“Truth be known, if you don’t play up, then the rest of the time you’re playing down,” Northside coach Gil Robbins said. “The hope is that they picked up enough that this (conference) competition is going to look different to them and they’re going to be prepared for it. They’ve seen some of the best.”

Washington only has two games under its belt — decisive wins over Havelock and Northside by a combined 19-1 score — but has built plenty of confidence in its bats and pitcher Abbi Tucker.

The Lady Pack will look to maintain that momentum when it visits a Greene Central squad that is also undefeated early on.