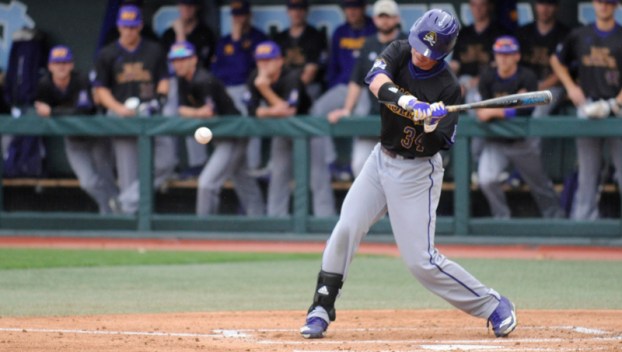 Chandler Jenkins sees a pitch to his bat at North Carolina earlier in the season.

ECU extends win streak to five after sweep of 49ers

CHARLOTTE — Alec Burleson was 3-for-6 at the plate to spearhead a 12-2 shellacking of Charlotte in the backend of Saturday’s doubleheader. The win completed the weekend sweep of the 49ers, and extended ECU’s winning streak to five in a row.

Burleson, the freshman out of East Lincoln, accounted for five of ECU’s dozen runs. He plated three with a bases-loaded double in the fourth. Drew Henrickson also notched three hits. Spencer Brickhouse and Seth Caddell each had two-run home runs, and Jake Washer added a solo shot of his own.

ECU, as a squad, tallied a season-best 18 hits.

“Our speed really put pressure on them with Dusty Baker, Brady Lloyd and (Nick) Barber executing our plan. But I’m just really proud of our guys today stepping up when called on and never skipping a beat,” head coach Cliff Godwin said.

Defensively, the Pirates had Tyler Smith making his first weekend start of the season. He flew through six scoreless innings in which he allowed just three hits and a walk. Jake Kuchmaner, Sam Lanier and Willy Strong each threw an inning of relief.

Saturday’s first game saw ECU hold on for a 6-5 win. Charlotte went into the bottom of the ninth facing a 6-2 deficit, but got two lead-off singles and capitalized on a pair of Pirate errors to pull within one. Burleson induced a lineout to centerfield to stave off the 49ers.

The Pirates broke a scoreless tie with four runs in the top of the seventh. Connor Litton drew a lead-off walk, and Washer’s double to left field put two in scoring position with none away. The two came in on consecutive sacrifice flies by Whitehead and Henrickson. Baker and Lloyd followed that with back-to-back two-out RBI knocks.

Chris Holba rolled through nearly seven innings en route to the win, which extends his record to 4-0. His streak of 25 2/3 scoreless innings came to an end in the bottom of the seventh when he was tagged twice.

Trey Benton was two outs away from a complete game in Friday’s 3-1 series-opening win. He allowed just one run as he scattered five hits and two walks over 8 1/3 stanzas.

He handed the ball to Burleson, who quickly set down the last two batters.

ECU got the jump on Charlotte early on when Brown began the contest with a single to left field. He scored on Brickhouse’s base hit to center. Washer roped a single to center, too, that plated Brickhouse.

ECU hosts VCU and Elon for midweek meetings on Tuesday and Wednesday, respectively, before welcoming Maryland in for a weekend set. This marks the last weekend before the Pirates begin American Athletic Conference play at Central Florida.

Compher out as ECU AD

GREENVILLE — After weeks of speculation, the East Carolina University Board of Trustees Friday morning approved the departure of director... read more