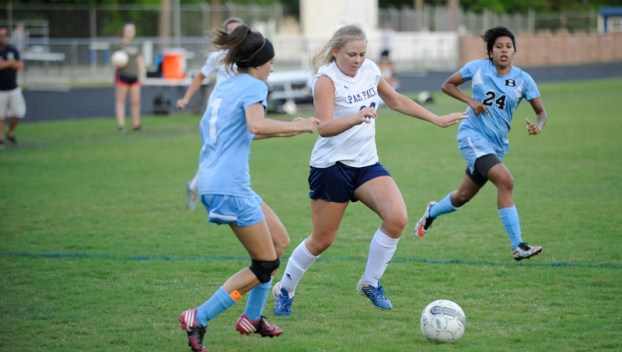 Jordan Prescott navigates her way around defenders during a game last season. The Washington senior had a hat trick in Thursday’s win.

After clobbering Greene Central, 11-2, in its 2-A Eastern Carolina Conference opener on Tuesday, Washington blanked Northside-Jacksonville in non-conference action on Thursday.

The Lady Pack found twine three times in the first half and added a fourth goal in the second. Jordan Prescott had a hat trick, and Sydney Walker assisted on two of the four goals. Anna Frisbie also scored.

PINETOWN — Northside snapped a two-game skid Thursday in a 3-0 win over former 1-A Coastal Plains Conference foe East Carteret. The Panthers took the lead with a run in the third, then added two more in the fifth to seal it.

Northside traveled to Bertie for a second-straight non-conference matchup before next week’s meeting with South Creek.

Senior Mariah Gurkin had two hits for four RBI and a run, and six other Washington batters had a knock as the Lady Pack lambasted Northern Nash, 10-0, in five innings Thursday. A 3-0 lead in the fourth inning turned into a blowout after seven players came around in the bottom of the fifth.

Sophomore pitcher Abbi Tucker allowed just one hit and struck out nine of the 16 batters she faced.

Desiree Maurizzio scored twice and had an RBI in the win. Emme Davis, Summer Campbell, and Kaylee Elks each drove in a run, too.

CHOCOWINITY — Southside bounced back from its first loss of the season with a 5-2 win over Farmville Central Thursday. Sindy Chavez Pullman scored four goals to lead the Lady Seahawks to a season-best offensive output.

Pullman also assisted on Sarah Petty’s goal. Southside exploded for four goals in the first half. The duo of Carleigh Findley and Keely Bennett combined for 13 saves.

Southside will host North Pitt Monday in the middle game of a three-match home stand.

BATH — Northside hosted a conference match Wednesday at Bayview. Riverside placed first with a team score of 174. The Panthers (196) followed in second, barely scooting by the Seahawks (197).

Riverside’s Landon Gurganus ranked first with a 38. The Knights had the top-three golfers on the afternoon.

Football first for as long as Williams can remember

When Jimmy Williams was 5 or 6 years old, he’d put his mattress up against the wall in his bedroom.... read more