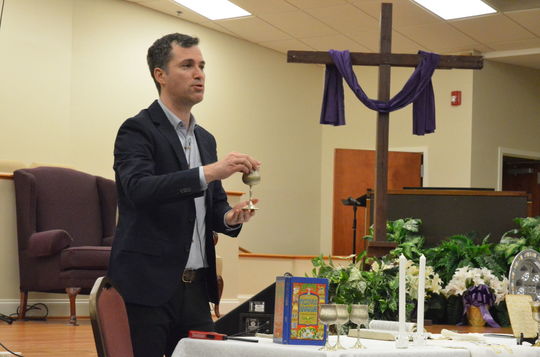 MAKING THE LINK: Aaron Abramson, a Jews for Jesus missionary, explains the connection between the ancient Festival of Redemption and Jesus as the Lamb of God. Abramson will lead a Christ in the Passover observance in Washington on March 29. (Jews for Jesus/Aiken Standard)

Want to experience a meal that has its roots in the days of Moses?

That’s possible at 7 p.m. March 29 at the Family Life Center at Washington’s First Baptist Church when people can experience elements of the Passover Seder meal — bitter herbs, matzah bread and horseradish — that Jesus observed. The event, Christ in the Passover, is presented by Jews for Jesus. It provides a link between the ancient Festival of Redemption and Jesus as the Lamb of God.

The event is free and open to the public.

Aaron Abramson, who was born in the United States and grew up in Israel, will lead the observance of the Passover Seder meal. The observance culminates with communion.

Abramson is the leader of the New York branch of Jews for Jesus. He has a bachelor or arts degree in biblical and intercultural studies from All Nations Christian College in England. He is in a graduate program at New York University. He served three years with the Israeli Defense Forces.

“It’s helping people in the church to understand the roots of our communion and the elements and what Jesus came to do as the Lamb of God. So, it’s really kind of giving the traditional Jewish context that would have been observed in the first century. It would have made complete sense to a Jewish audience, but being that most people in the church don’t get a chance to experience that, a lot of it is enigmatic. It’s kind of demystifying certain things and helping people to understand those connections,” Abramson said of Christ in the Passover. “There’s messianic implications within the Passover Seder that a lot of people are surprised to see.”

The Seder is based on Exodus 13:8, which commands Jews to retell the story of the Exodus from Egypt: “You shall tell your child on that day, saying, “It is because of what the LORD did for me when I came out of Egypt.”

“I had that in the back of my mind for quite awhile as something for us to do. I had the longing to do that for quite awhile,” said the Rev. Greg Barmer, senior pastor at First Baptist Church. “About 18 months ago, I had a call from one of their (Jews for Jesus) representatives asking about the possibility. So, we scheduled it. I wanted to do it on Maundy Thursday instead of some other time. We had to wait 18 months to get that scheduled.”

Abramson was born in Detroit, Michigan, to Jewish parents. “Most people figure out with a name like Aaron Abramson that I grew up in a Jewish family, but it’s a little unusual for a couple of reasons. First of all, my parents became believers in Jesus before me. Second of all, my parents moved to Israel when I was a teenager. Those two things made a huge impact in my life early on,” Abramson said in one of his Shout Out podcasts. “I hadn’t really been raised with a strong, orthodox Jewish upbringing, more conservative, and also with a unique kind of experience in a local Christian church. There was a little Baptist church I would attend occasionally.”

For more information about Christ in the Passover, call the church at 252-946-8074 or visit www.thefirstbaptistchurch.com.

Truth, justice and a better tomorrow

Make God real for someone today

Forsaking personal liberty for my neighbor