New gear in the works for Sparky the fire dog 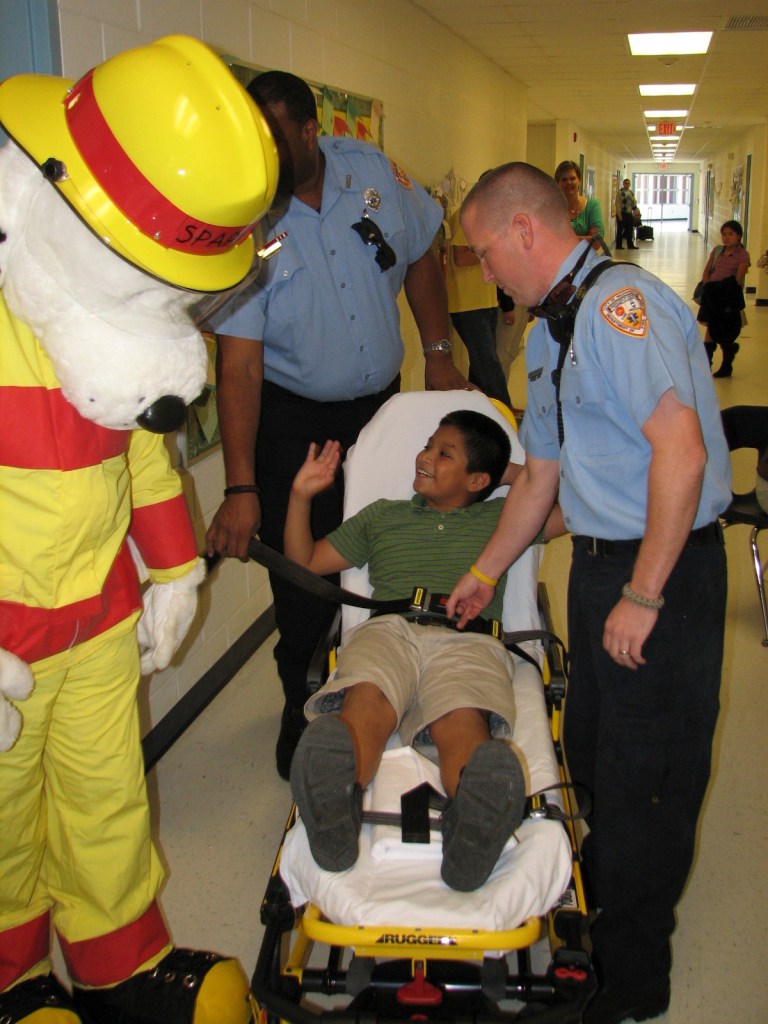 ON THE JOB: Sparky accompanies a John Small Elementary School student who was a winner in the annual Great Escape Plan Challenge’s program known as EDITH — Exit Drills in the Home. (DAILY NEWS)

Sparky the fire dog is being replaced, sort of.

The Washington Fire-Rescue-EMS Department is seeking grant funding to replace its Sparky costume and an inflatable fire-education house. Washington’s City Council, during its March 12 meeting, authorized the department to seek $16,904.76 for the items. The city plans to combine $845.24 of city money with the federal grant, which would be in the form of Federal Emergency Management Agency fire prevention and safety grant, according to a memorandum from Robbie Rose, the city’s fire chief, to the mayor and council members.

The department’s current Sparky costume, about 20 years old, is showing its age, according to Robbie Rose, the city’s fire chief. “We got it originally with some grant money. What has happened to it is there are parts of the costumer that are really starting to show some wear and tear, especially the electronics that work all the parts,” Rose said. “The head, the cooling fan, the eyes and the voice-project amplifier — all that stuff has quit. It kind of makes it tough on the person inside the suit with no ventilation going through there.”

The inflatable fire-education house would be something new for the department. “It’s really something portable that we can carry around with us and use at the schools or any areas where we are working with children. We do a lot of that in October with all the kids in the elementary schools,” Rose said. “Years back, we had the trailer (on which a small, fire-education house sat). That belonged to the county, and everybody shared that. We’re trying to find something that’s more portable and something we can keep here at the station, even put it up at the station for special events.”

Sparky makes appearances at events throughout the city, including many downtown festivals. Sparky also is a key participant in the department’s annual Great Escape Plan Challenge’s program known as EDITH — Exit Drills in the Home, held in October of each year.

Sparky accompanies firefighter/EMTs when they go to John Small Elementary School to pick up contest winners, two from the fourth grade and two from the fifth grade. The winners, with Sparky by their sides, are transported by way of an EMS gurney to waiting fire and EMS vehicles. The students are taking to the department’s headquarter station at the intersection of Fifth and Market streets for a pizza lunch and taken aloft in the department’s aerial platform.

Sparky’s history goes back to 1951, when children were encouraged to send in quarters to become members of Sparky’s fire department. In the 1960s, Sparky had his own song: “Help Sparky the fire-dog! When you’re careful, then you’re really smart; so never give a fire a place to start!” The National Fire Protection Association developed the Sparky character as a way to teach children fire safety.