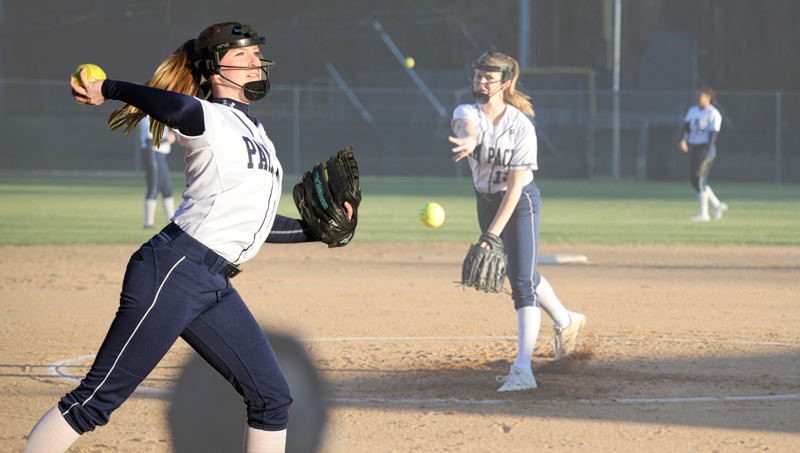 (Left) Mary B. Dixon makes a throw from third base. (Right) Abbi Tucker warms up between innings.

Tucker is more than OK. She’s been nothing short of sensational through five games this season. She boasts a 0.25 ERA — one run on six hits and two walks in 28 innings. Few opponents have had an answer for the speed at which she throws. She’s struck out 57 of the 95 batters she’s faced.

And, only a sophomore, Tucker has no issues with shouldering the load of the starting role. She split time in her freshman season with then-senior Hailey Harris. This year, she’s thrown all but one inning early in the campaign.

Last week saw Tucker pitch three-straight games. They were all mercy-rule wins, which helped save her arm some and keep her fresh for the next night. She never seemed any worse for the wear as she fanned 31 batters over those three outings.

“It’s so much better. It helps in games when we have multiple in a week. It really helps. I love it,” Tucker said of wrapping up games before the full, seven-inning mark.

Tucker also said she’s confident in the defense behind her. Of course, the field doesn’t see much action when Tucker is fanning over 50 percent of the batters she faces.

“I feel like I don’t always get that much action at second base. But, when I do, I’m ready,” senior Mariah Gurkin said. “Abbi is just an outstanding pitcher. There’s not too much to do in the infield when she’s striking them out left and right.”

When tested, Washington’s defense has done well. It’s averaging less than an error per game. That, combined with Tucker’s minimal walks, has all but negated what Whitehead calls “freebies.”

Now, after winning three times in three days, Washington puts its undefeated start on the line with back-to-back 2-A Eastern Carolina Conference games. The Lady Pack welcomes Ayden-Grifton in on Thursday before traveling to South Lenoir on Friday. Both teams have four wins on the season.

Washington’s defense did well in the third game of its stretch last week. Its offense still scored in double digits each time out. Now, with five days off, the Lady Pack looks to keep the ball rolling.