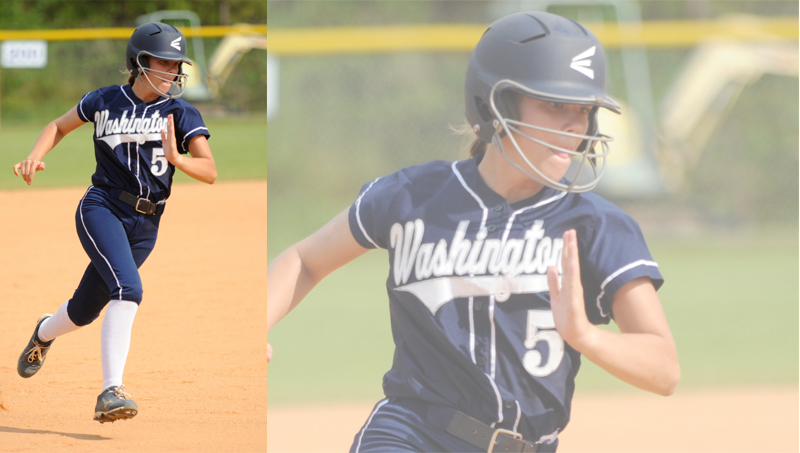 Meghan Horton rounds second and makes her way to third during a game last season.

Meghan Horton is set to return to her alma mater Thursday. But, after years of helping Washington softball reach new heights, Horton will be in the opposite dugout.

In addition to Young Life, Horton serves as the Lady Chargers’ assistant softball coach. She said it’s sometimes been a tough adjustment going from playing for so many years to the coaching side of the game.

“It’s tough to be able to critique somebody. I’m kind of hesitant when I see somebody doing something, not wrong, but where I could help them a little bit, it’s hard for me to speak up and say it. I’m not used to that,” Horton said. “It’s hard not being the one taking in the criticism and being the one giving the advice.”

She expects the biggest shock to be when she visits her former stomping grounds Thursday. Her Lady Chargers will go up against a Lady Pack team consisting largely of players she grew up and played with.

On top of that, Horton’s father, Brad Horton, is an assistant for Washington. Verbal jabs are expected to be traded in what has become a gentle family rivalry since Horton started coaching with a conference opponent.

“It’s going to be for bragging rights in the house,” Horton laughed. “He tries to ask me, ‘Oh, when y’all played this team, what did they do?’ I won’t give him anything. He doesn’t give me anything.”

This has been an opportunity for Horton to combine passions. She’s played softball almost her entire life, and Young Life was something she fell in love with at Washington.

“I did Young Life all through high school, so I went to college wanting to do Young Life again,” Horton said. “I decided that I wanted to be a Young Life leader. So, for that, I went through training, which was probably October through December or January.

“I went to the school and I was trying to figure out how to reach out to different kids. … I’ve been in softball, obviously, for a long time, so I figured what better way for me to reach out to kids? And I got back to softball a little bit.”

Horton reached out to the school’s athletics director and softball coach. They welcomed her with open arms. In fact, she’s been taking on more responsibility than she initially expected. She’s been at practices and on the road traveling with the team to games.

“It’s been awesome. It’s so tough because, with all the schoolwork you have with college, it’s insane,” Horton said. “Then we have practice everyday after school that I have to drive 30 minutes to everyday. … It’s been really tough, but it’s the most rewarding thing ever. It’s really cool to see the girls grow as a family.”