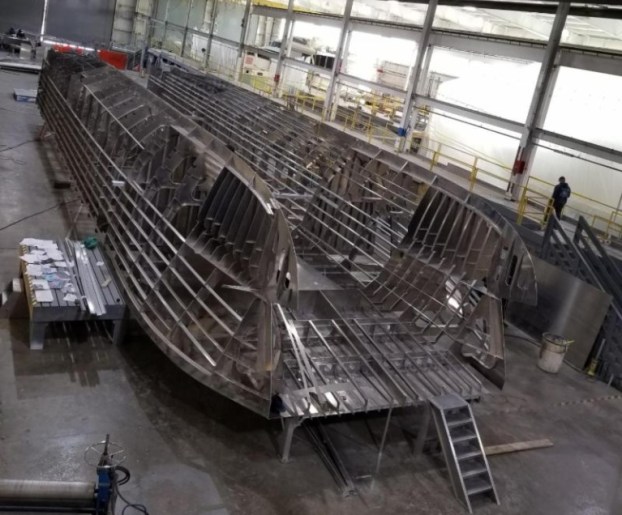 GETTING CLOSE: Construction and outfitting of the Ocracoke Express, which will be a passenger-only ferry serving the Ocracoke-Hatteras route, continues. (Teresa Adams)

Passenger-only ferry should be making trips during summer season

The new service allows tourists and others an opportunity to visit Ocracoke without facing parking and/or traffic problems. The 98-passenger Ocracoke Express will leave the Hatteras ferry terminal several times a day through September.

Much of the funding comes from a Federal Lands Access Program grant, Hass said. The contract calls for Armstrong Marine to deliver the new ferry by April 28. The vessel will be built at the company’s shipyard in Swansboro.

Operating on a reservation system, Dixon said, the new ferry would enable vacationers to “really control their day. … A day-tripper will be able to make a reservation for the time they want to leave and return, which is huge for someone on vacation.

Dixon explained to the Hyde County commissioners that the currently operating car ferry follows a much longer horseshoe-shaped route from Hatteras Village to the ferry terminal at the north end of Ocracoke Island than it had previously “due to an extreme amount of shoaling in the Hatteras Inlet area.” The longer route, Dixon explained, has increased operating costs by $250,000 per month, reduced daily ferry departures from each side from 52 to about 42 and doubled the travel time to about an hour while increasing the wait time at each terminal by one to two hours. Noting visitors’ primary destination is Ocracoke Village at the south end of the island, Dixon said this adds a 20- to 30-minute drive to the ferry trip.

The Pungo River and its tributaries, including Wright’s Creek and Satterthwaite Creek, provide kayakers and canoers plenty of opportunities —... read more