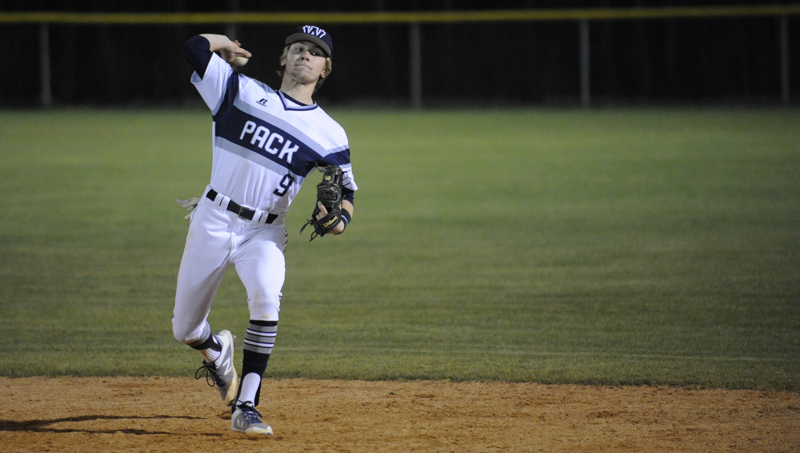 Chris Sulc fields a grounder and makes the throw to first base.

Chris Sulc’s presence was felt throughout Thursday’s 10-0 win over 2-A Eastern Carolina Conference foe Ayden-Grifton. The senior second baseman made every play that came his way as Washington’s defense held the Chargers to four baserunners over six innings.

At the plate, Sulc was 2-for-3 with a run scored and knocked in Logan Everette for the first marker of the game.

“A lot of straight fastballs. I didn’t see a lot of curveballs,” Sulc said. “We’ve got to be selective in situations like that. We’ve got to sit back and drive it. … It’s been an adjustment. At the beginning of the year, we were chomping at the bit to get up there and attack the fastball. The more pitches we see, the more our on-base percentage goes up.”

Sulc has also been an effective pitcher for the Pam Pack. He has a 1.40 ERA in 10 innings of work. He wasn’t needed on the mound Thursday, though, as Tyler Harrell rolled through over five frames, and Frederick Holscher closed out the win.

“Defense is definitely our stronghold right now. We’ve always had pretty strong defense,” Sulc said. “Groundballs make it easy. When the pitchers are getting groundballs, it makes it really easy. Defense definitely takes pressure off the pitchers.”

Harrell struck out the first two Chargers he faced. Jordan Atkinson belted a grounder Sulc’s way, and he made a sliding stop to make the play that retired the visitors in order in the first.

Ayden-Grifton got the game’s first runner in the top of the third. Harrell recovered by inducing a groundout back to himself that stranded Josh Harris on third. Washington went on to draw first blood in the bottom half of the frame.

The Pam Pack then pulled away with three runs in the fourth. Drew Ferguson led off with a single through the left side. Cooper Anderson and Harrell drew consecutive walks to load the bases with none out. Everette plated two with a line drive over the left side. Wilson Peed, running for Harrell, later scored on an error.

The Chargers looked to chip away at their 4-0 deficit in the top of the fifth. Brandon Benfield notched a one-out single, but he was erased when Sulc helped turn a 4-6-3 double play.

“Defense stepped up,” coach Kevin Leggett said. “Tyler’s breaking ball, when it’s on, he’s as good as anyone we’ve got. Our pitching staff, when they’re on like that, any of them can start against anybody.

“Chris made a great double play. Trippe Bonner has stepped up with Carson (Asby) hurt in the outfield. Trippe made some great plays at the fence and in the gap.”

Washington blew the game open with a four-run fifth that doubled its lead. Sulc and Holscher led off the stanza with back-to-back base hits. Ferguson pushed Sulc across with a double to right-centerfield, then Holscher came in on a passed ball. Anderson and Ferguson both touched home when Harrell belted a single to right field.

“We just got patient at the plate. We’ve been working on that really hard,” Leggett said. “We’ve been telling them to get a good hitter’s count, and they’ll get a good pitch to see.”

Ayden-Grifton made its first of two pitching changes to escape the inning. Anderson and Peed closed out the game with two-straight RBI doubles in the sixth.

The game set up a tiebreaking clash with South Lenoir on Friday. The Blue Devils, like Washington, are 3-0 in ECC action. They own wins over Kinston, the Chargers, and West Craven.