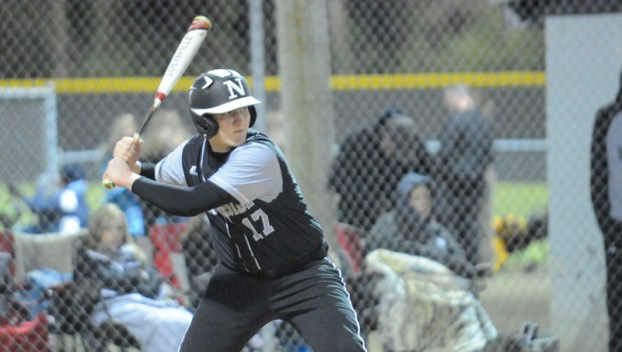 Zach Griffin readies himself for a pitch earlier in the season against Washington. Griffin excelled at the plate and on the mound in the Panthers’ win over South Creek.

ROBERSONVILLE — Parker Boyd was 3-for-3 Thursday evening as he drove in three runs and scored two himself to lead Northside to a 10-0 win at South Creek. Matthew Marslender, Reg Bishop, and Zach Griffin each had two hits, as well.

Griffin had a game-best four RBI in his 2-for-2 night at the dish. He earned the win on the mound as he allowed only one hit and struck out a dozen in his five innings of work. He faced the minimum of 15 Cougar batters.

The Panthers took an early lead on a three-run first inning. They scored three times in the fourth and fifth frames, too, en route to the mercy-rule win.

TRENTON — Southside shut out Jones Senior for six innings after allowing two runs in the first. Its offense collected nine hits, and capitalized on four Trojan errors, to pick up its first 1-A Coastal Plains Conference win, 5-2, Thursday.

Will Warren and Jarrett O’Neal each had two hits in the win. Five others also had a hit.

Davis Porter took over on the mound after Jones Senior struck for its two quick runs. He cruised through six frames of shutout work, scattering six hits and two walks. He notched five strikeouts.

The Seahawks got one across in the top of the second to cut their early deficit in half. A three-run fourth gave them a lead they’d never relinquish.

Southside, winners of two in a row after dropping the first four of the season, wrapped up the week when it hosted Riverside on Friday.

Summer Campbell and Kaylee Elks each had home runs in Washington’s 7-2 win over Ayden-Grifton on Thursday. Campbell launched a three-run shot in the third, and Elks followed with a two-run dinger in the fifth.

Washington preserved its undefeated start against a gritty Lady Charger squad that cooled the Lady Pack off after it scored five times in the first two innings.

Abbi Tucker allowed two runs (one earned) on three hits and no walks in her seven innings. She struck out seven.

Campbell was 3-for-4 on the evening. Desiree Maurizzio was the only other Washington batter to collect multiple hits.

The Lady Pack traveled to another undefeated 2-A Eastern Carolina Conference opponent in South Lenoir on Friday.

ROANOKE — Riverside scooted past Northside for first by one stroke in Thursday’s match at Roanoke Country Club. Brennan Baldwin shot an 87 to lead the Panthers. He was followed by Bryson Radcliffe (88) and Dustin Boseman (88). Braeden Cooper came in with a 91.

SNOW HILL — Washington’s boys extended their perfect start against 2-A Eastern Carolina Competition to 5-0 after winning Thursday at Greene Central. The Pam Pack earned 122 points. Kinston trailed in second with 80.

Strengths have been various: distance running, relays, hurdles, and jumps.

The Lady Pack (89) finished second to Kinston (106). They had a “strong showing even being short handed in several spots,” wrote coach Perry Owens.

BELHAVEN — Pungo blew Thursday’s game against rival Terra Ceia wide open with a four-run fifth inning to fuel a 7-4 win. The Knights scored a pair in each of the final two frames, but couldn’t complete the comeback.

Ryan Bishop drew first blood for the Raiders with a run in the bottom of the first. Ben Simmons and Nate VanStaalduinen each came home in the third to extend the lead to 3-0. A handful of Terra Ceia errors helped Pungo pour on four more in the fifth, and the 7-0 advantage helped stave off a rallying attempt from the visitors.

Alex VanStaalduinen was 3-for-4 and batted in all four of the Knights’ runs.