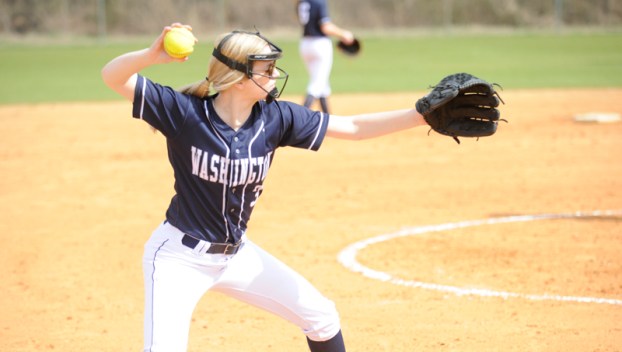 Emme Davis makes a throw from third earlier in the season. Davis had three hits as Washington won an 11-inning affair at South Lenoir Friday.

DEEP RUN — Washington scored six times in the top of the 11th inning to break a 1-1 tie and defeat South Lenoir to improve to 7-0.

Sophomore pitcher Abbi Tucker conceded no earned runs in her complete game. She gave up nine hits — including a triple — as she faced 44 batters and tossed 118 pitches. The Lady Pack had eight hits, and capitalized on five Lady Blue Devil errors in the win.

South Lenoir took a 1-0 lead in the bottom of the third inning. Washington responded with the tying run in the top of the sixth.

Emme Davis was 3-for-6 with two RBI and a run scored. Tucker also had multiple hits, and Mary B. Dixon batted in a pair of runs. The Lady Pack’s seven runs came from seven different players.

PINETOWN — Northside’s defense buckled down after surrendering a pair of runs in the top of the first. The Panthers took the lead right back, and cruised to a 6-2 win over Tarboro Friday.

Zach Woolard pitched for all but the final out. He was tagged for those two first-inning runs as he scattered seven hits and a walk over 6 2/3 frames. He fanned 10 batters. Reg Bishop closed the game.

Woolard, Bishop and Tanner Alligood each notched a pair of hits. Bishop batted in a team-high two runs and scored another himself. Parker Boyd scored twice.

PINETOWN — Northside tallied 11 hits and took advantage of four Tarboro errors on the way to a 12-2 win Friday.

The Lady Panthers jumped on the visitors with six runs in the bottom of the first. The lead grew to 12-0 by the end of the third. Tarboro scored twice in the fifth, but it wasn’t enough to prevent the mercy rule from being enacted.

DEEP RUN — South Lenoir was efficient in a 4-0 win that marked Washington’s first loss in the 2-A Eastern Carolina Conference. With that, the Blue Devils moved into sole possession of first in the league.

South Lenoir’s offense used four hits and six walks to notch four runs. The Blue Devils struck twice in the bottom of the second. They added a run in each of the fifth and sixth innings to create some breathing room.

Washington will look to bounce back at Rose on Monday before resuming ECC play when Kinston visits on Thursday.

CHOCOWINITY — Southside’s first loss was a bitter one. After beginning 6-0, the Lady Seahawks were hammered, 19-0, Friday at home.

Riverside scored 12 runs right out of the gate. However, only seven of the runs Southside conceded were earned. The Lady Seahawks had five errors in the lopsided loss.

Offensively, Southside had few answered for the Lady Knights’ pitching and defense. Symone Ruffin had the team’s only hit.

The Lady Seahawks are back in action Tuesday when they host Northside.