Pirates put on a thriller in Purple-Gold scrimmage 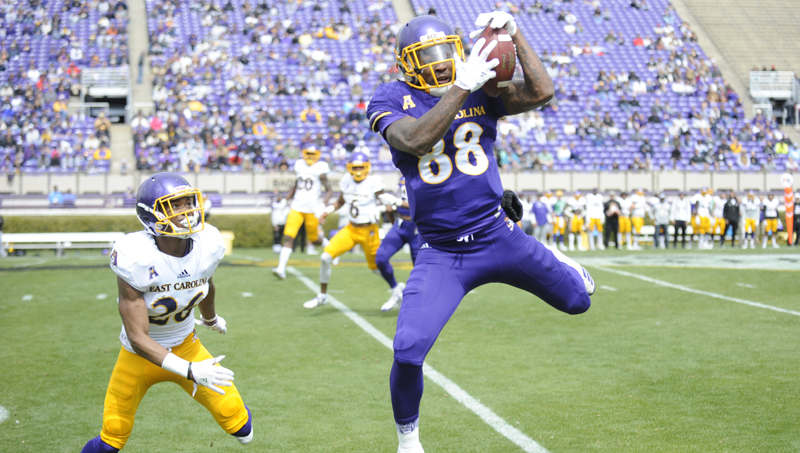 Trevon Brown hauls in a pass in Saturday’s scrimmage.

Christian, who scored all three of the gold team’s touchdowns, commanded attention in the finale of ECU’s spring training. The running back position was one of many battlegrounds over the last 15 practices and scrimmages, as evidenced by the down-to-the-wire Purple-Gold game.

“It was wide open. I just went right down the middle,” Christian said of his third, decisive trip to the end zone. “Our running backs are awesome. We’ve got four, five or six good running backs in the room.”

Quarterback Reid Herring added: “The offensive line was great for us. We had some passing plays to open the run game for us. That really helped us today.”

The spattering of ECU fans got to experience the battle at the quarterback spot firsthand. Herring — the only of the three signal callers to have thrown a pass in a collegiate game — was under center for the winning squad.

Herring provided an early highlight when he linked up with tight end Anthony Watley for a 55-yard gain on the second play of the scrimmage. The opening drive produced no points, though, and the purple unit took a 7-0 lead on a scoop-and-score by linebacker Cole Nigro on gold’s second series of the afternoon.

“That was a big hit,” head coach Scottie Montgomery said of the collision that caused the fumble. “I haven’t very many of those since I’ve been here. I think that we tackled better today than we have in a long time.”

Conley product and freshman quarterback Holton Ahlers ran the show the purple team for all but two series. He only managed to throw for 68 yards in the first half, which featured a connection with former Viking teammate Duce Fuller, but settled in after halftime. He finished with 205 yards passing.

Ahlers drove the purple squad to the goal line in the second half, but was stopped repeatedly before fumbling an exchange with his running back.

Redshirt freshman Kingsley Ifedi turned a few heads by capitalizing on his two chances at quarterback. His first play was a 40-yard hookup with Trevon Brown, and he showed plenty of mobility in punching in a 2-yard touchdown.

“We split all the skill up today,” Montgomery said. He then pointed out the injured players like Darius Pinnix and Blake Proehl. “Now you’re starting to feel like your talent level is where it needs to be. It’s a really, really good feeling.”