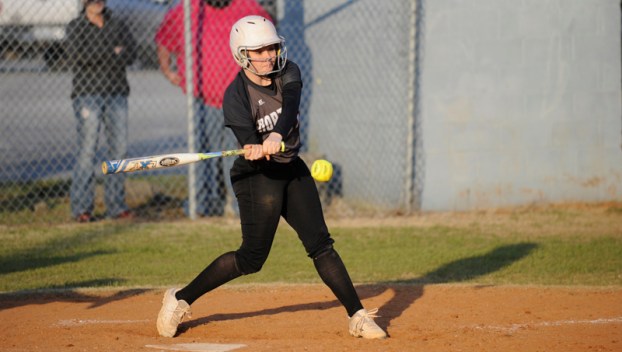 Teagan Pilgreen sees the ball to her bat in a game earlier this season.

Grading Out: Handful of local teams vying for top spots

There were some impressive moments last week that helped many of Beaufort County’s teams stay in the hunt for first place in their respective conferences.

Washington’s softball team remained undefeated with wins over a scrappy Ayden-Grifton squad, and an extra-innings affair at a South Lenoir team previously undefeated in league play. Summer Campbell and Kaylee Elks had home runs in the win over the Lady Chargers.

Moments like those shift momentum more often than not. However, it’s also consistency that helps great teams stay that way.

Abbi Tucker allowed just one earned run in wins over Ayden-Grifton and South Lenoir this past week. Most impressive was her consistency as she went the distance for an 11-inning win against the Lady Blue Devils on Friday.

The sophomore pitcher threw 118 pitches on Friday alone, which was Washington’s second game in a row. Offensively, she also had three hits and scored twice to help the Lady Pack improve to 7-0 and move into sole possession of first place in the 2-A Eastern Carolina Conference.

Northside won twice in 1-A Coastal Plains Conference action last week by a combined 26-2 score. The bats were going early and often, and few Lady Panthers were as effective at the plate as Teagan Pilgreen.

The junior was 4-for-4 in Thursday’s 14-0 at South Creek. Two of those knocks went for two bases. She finished the game with six RBI and another three runs scored, accounting for half of the team’s scoring output. That carried over to Friday against Tarboro as Northside jumped out with six runs in the first on the way to a 12-2 win.

Lily Frances Lobos, despite being only a freshman, continues to make a case for being the best soccer player in Beaufort County. She scored one of Washington’s two goals in a non-conference loss to Havelock.

The Lady Pack rookie was instrumental to a 9-0 bounce-back win against South Lenoir. She scored four goals and assisted on another. Lobos’ 20 goals lead the team, and her seven assists rank second. Washington is 3-0 in the 2-A Eastern Carolina Conference behind her and senior Jordan Prescott.

Northside won two 1-A Coastal Plains Conference games in convincing fashion last week. Zach Griffin helped make both victories possible through his work on the mound and at the plate.

It started with a 10-0 win over South Creek in which Griffin allowed just one hit and fanned 12 of the 15 batters he faced. He had a pair of doubles as he batted in four runs. Then, after falling behind early against Tarboro, the Panther senior batted in one run and scored another in a 6-2 win.

Cody Modlin helped Southside win a nine-inning thriller over Columbia for its first victory after starting 0-4. He came in and scattered four hits and two walks over 5 1/3 innings. He allowed one unearned run and struck out four in that span.

The Seahawk senior also scored two of his team’s runs. He scored once in a 5-2 win over Jones Senior — Southside’s second in a row last week — to help the Seahawks overcome an early 2-0 deficit.